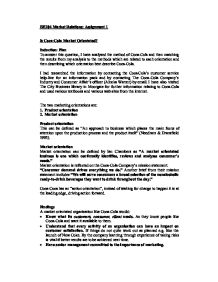 BH104 Market Relations: Assignment 1 Is Coca-Cola Market Orientated? Induction: Plan To answer this question, I have analysed the method of Coca-Cola and then matching the results from my analysis to the methods which are related to each orientation and then describing which orientation best describe Coca-Cola. I had researched the information by contacting the Coca-Cola's customer service help-line for an information pack and by contacting The Coca-Cola Company's Industry and Consumer Affair's officer (Alneka Warren) by email. I have also visited The City Business library in Moorgate for further information relating to Coca-Cola and used various textbooks and various web sites from the internet. The two marketing orientations are: 1. Product orientation 2. Market orientation Product orientation This can be defined as "An approach to business which places the main focus of attention upon the production process and the product itself" (Needham & Dransfield 1995). ...read more.

* Understand that every activity of an organisation can have an impact on customer satisfaction. If things do not quite work out as planned e.g. like the launch of New Coke. By the company learning through experience of taking risks is vital if better results are to be achieved next time. * Have senior management committed to the importance of marketing. Coca-Cola is now trying to develop the brands vertically (most well known brands include Coca-Cola, diet coke, Sprite and Fanta), by creating a deeper consumer desire for that brand than expected the day before. This involves giving people more reasons to buy Coca-Cola brands instead of reasons to buy competing ones, such as Pepsi (Owned by PepsiCo) and Richard Branson's Virgin Cola. ...read more.

It was coke biggest ever UK promotion. Later this year Coca-Cola GB was again focusing on teenagers by offering them the chance to win a 48-hour break in teen-themed house, sponsored by its Fanta brand. The "Fanta House" features an Internet caf�, an electronic games room, a table football room, and a chill-out zone. Coca-Cola is dubbing the initiative "the ultimate hang-out". Conclusion From the information that I have gathered that through increasing competition from other competitors, Coca-Cola is adopting to market orientated. They are researching and providing customers with what they want and satisfying their needs through the promotions and offers on pre-paid mobile phones and having competitions for The Fanta house. The emphasis on consumer orientation has meant that their products have continued to be successful by being able to provide the products that the consumers want and if they do not prove to be successful they are bold enough to listen and to make changed. ...read more.