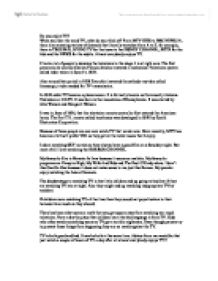 is television good or bad??

Do you enjoy TV? When you hear the word TV, what do you think of? From MTV HITS to BBC NEWS 24, there is an amazing variety of channels that literally stretches from A to Z. for example; there is TROUBLE, LIVING TV for the teens to the DISNEY CHANNEL, JETIX for the kids and the NEWS for the adults. Almost everybody enjoys TV. It took a lot of people to develop the television to the stage it is at right now. The first person (as he claims) ...read more.

It was in June of 1956, that the television remote controller first entered the American home. The first T.V. remote called lazy bones was developed in 1950 by Zenith Electronics Corporation. Because of those people we can now watch TV that we do now. More recently, MTV has become a hit but I prefer VH1 as they get all the latest music that I enjoy. I adore watching SKY movies as they always have a good film on a Saturday night. But most of all I love watching the HORROR CHANNEL. ...read more.

If children were watching TV all the time then they would not pay attention to their homework as much as they should. There has been what seems a myth that you get square eyes from watching too much television. Now a day the place that children learn the bad language is from TV. Kids who often watch something scary on TV get a terrible nightmare. Even though parents try to prevent these things from happening they are no match against the TV. TV is both good and bad. It can be both at the same time. Advice from me would be that just watch a couple of hours of TV a day after all almost everybody enjoys TV!! ...read more.