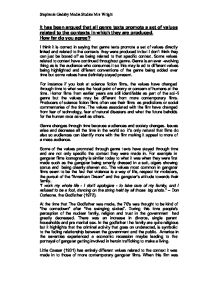 It Has been argued that all genre texts promote a set of values related to the contexts in which they are produced. How far do you agree?

It has been argued that all genre texts promote a set of values related to the contexts in which they are produced. How far do you agree? I think it is correct in saying that genre texts promote a set of values directly linked and related to the contexts they were produced in but I don't think they can just be boxed off as being related to that specific context. Some values related to context have continued throughout genre. Genre is an ever-evolving thing as is the audience who consumes it so this may lead to different values being highlighted and different conventions of the genre being added over time but some values have definitely stayed present. For instance if you look at science fiction films, the values have changed through time to what was the focal point of worry or concern of humans at the time. Horror films from earlier years are still identifiable as part of the sci-fi genre but the values may be different from more contemporary films. ...read more.

There was an increase in divorce, single parent households and pre marital s*x. In the godfather the family are quite religious but it highlights that the criminal activity that goes on undetected, is symbolic to the fading relationship between the government and the public. America in the seventies experienced a economic recession maybe leading to the portrayal of gangster getting involved in heroin trafficking to make a living. Little Caesar (1931) has entirely different values related to the context it was made in to those of more contemporary gangster films. When this film was made, America was under prohibition from 1920. This meant that alcohol usage in the film was quite taboo however the main character Rico has alcohol as a status symbol within the film. At the time it was something that was banned yet Rico was able to get some. This shows his rise to power and his achievement of what he personally wanted which was to be rich and powerful. ...read more.

Contemporary children's films seem to promote values of unity, superheroes and good vs. evil seen in such films as The Incredibles, a film about a family of superheroes and the more recent Golden Compass following the journey of a girl on a quest to stop evil forces. It seems that both these films have come at a time when the American and British forces are away where they must be united, they are set up in the news as heroes and heroines and in effect the good that must defeat the bad . I do think that genre texts definitely promote a set of values that are directly related to the context they were made in. I also think that some values have continued through the evolution of any one specific genre as the reason they evolve in the first place is because the audiences change and develop too as the values and ideologies change in society, proportionally to the audience. Stephanie Gadsby Media Studies Mrs Wright ...read more.