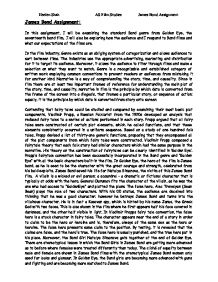 James Bond Assignment: In this assignment, I will be examining the standard Bond genre from Golden Eye, the seventeenth bond film. I will also be exploring how the audience and I respond to Bond films and what our expectations of the films are. In the film industry, Genre exists as an obliging system of categorization and allows audiences to sort between films. The industries use the appropriate advertising, marketing and distribution for it to target its audience. Moreover, it allows the audience to filter through films and make a selection on what they want to watch. Genre is a recognizable and established category of written work employing common conventions to prevent readers or audiences from mistaking it for another kind. Narrative is a way of comprehending the story, time, and causality. Since in film there are at least two important frames of reference for understanding the main plot of the story, time, and causality, narrative in film is the principle by which data is converted from the frame of the screen into a diegesis, that frames a particular story, or sequence of action; equally, it is the principle by which data is converted from story onto screen. Contending that fairy tales could be studied and compared by examining their most basic plot components, Vladimir Propp, a Russian Folklorist from the 1920s developed an analysis that reduced fairy tales to a series of actions performed in each story. Propp argued that all fairy tales were constructed of certain plot elements, which he called functions, and that these elements consistently occurred in a uniform sequence. Based on a study of one hundred folk tales, Propp devised a list of thirty-one generic functions, proposing that they encompassed all of the plot components from which fairy tales were constructed. Vladimir Propp composed a fairytale theory that each folk story had similar characters which had the same purpose in the narrative. ...read more.

Other conceptions can be made of the Gun Barrel sequence; it can be seen as the third person's point of view, and you are the camera following James Bond. The gun barrel sequence has evolved during the fifty years of the James Bond. In the older James Bond films, the sequence was shot through a pinhole camera in an actual rifle barrel until "Golden Eye". The recent Bond films are CG-animated ever since emphasizing light and shade variations in the rifling spiral as the reflected light shifts with the gun's movement. The gun barrel sequence was revised again for Daniel Craig's first portrayal of Agent 007 in "Casino Royale", released late in 2006. Unlike in previous films of the series, the gun barrel sequence does not open the film, but instead is incorporated to the ending of the pre-title sequence: Bond's first "kill" recovers and seizes his pistol to shoot Bond in the back. As the man brings his pistol up, the frame shifts instantly to the gun barrel. Bond spins around and shoots the man. This sequence is noticeably different from the Pierce Brosnan-era of CGI. The gun barrel has 28 shiny riflings, and the blood trickles down not as a slow-moving cascade, but in faster falling, 3D rivulets. This is also the first gun barrel sequence without some variation of the "James Bond Theme" and also the only rendition beginning with Bond stationary and his back to the camera. Because of the tiles on the bathroom wall, Bond is not shown against a plain white background. Furthermore, this is also the only instance in the series where the audience has seen the person whom Bond shoots. Over half a century of Bond film making, the only momentous difference in James Bond is the actor playing Bond. However, there are distinctive similarities between all the actors playing James Bond. They all are tall, dark and handsome with the Bond girl always new and heart-throbbing to catch the corner of the audience's eyes. ...read more.

He had that licence to kill, however he also had the licence to love. The twist of the Bond girl was how much equality they had in comparison to Golden eye. They were valued more in Casino Royal. Also, being as human as James Bond, he showed emotion, which was a change to the original James Bond convention. He showed anger whilst loosing in the poker tournament "Don't give a d*m!" when the waiter asked him how he would like his Martini. He'd normally be expected to say "Vodka Martini, shaken not stirred" as this is James Bond's catchphrase, and a convention the audience would recognise as being part of a James Bond film. In conclusion, the Bond genre has to adopt some conventions to suit a 21st Century audience. Some conventions such as the Bond girls still excites the male audience, however they will have to add more innuendo to make the connection between Bond and the girl, and to make it more humorous. Also, they will have to make the concept cars more unique and different to the original cars found in the 21st century roads. The features of the concept car must amaze the audience such as having the speed of lightning or invisible car that the audience has never seen before, as this is one of the main conventions of a Bond film. Also the gadgets are a key convention, and have to be up to date with the modern society. Although the audience know the outcome of a Bond film, it still excites the audience today; the audience would want to know Bond's latest mission, cars and the new Bond girl. The conventional plot remains unchanged however the detail is revised, making it a superb film. Knowing the general Bond conventions of the films, and knowing Vladimir Propp's fairytale theory, it makes the audience safe knowing that "good" will always triumphant over "evil" and that Bond will always win against the enemy. ?? ?? ?? ?? Heelen Shah AS Film Studies James Bond Assignment ...read more.

There is a lot of good stuff in this essay but the structure needs a lot of work. Basically, it's a mish-mash of interesting observations but with little sense of a coherent argument that progresses logically from point to point...

Current grade: 3 stars, or a fail because of plagiarism.