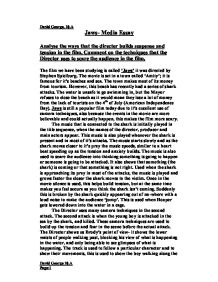 Jaws - Analyse the ways that the director builds suspense and tension in the film. Comment on the techniques that the Director uses to scare the audience in the film.

David George, 10.A Jaws- Media Essay Analyse the ways that the director builds suspense and tension in the film. Comment on the techniques that the Director uses to scare the audience in the film. The film we have been studying is called 'Jaws' it was directed by Stephen Spielburg. The movie is set in a town called 'Amity'; it is famous for it's beaches and sea. The town makes most of its money from tourism. However, this beach has recently had a series of shark attacks. The water is unsafe to go swimming in, but the Mayor refuses to close the beach as it would mean they lose a lot of money from the lack of tourists on the 4th of July (American Independence Day). Jaws is still a popular film today due to it's excellent use of camera techniques, also because the events in the movie are more believable and could actually happen, this makes the film more scary. The music that is connected to the shark is initially played in the title sequence, when the names of the director, producer and main actors appear. This music is also played whenever the shark is present and in most of it's attacks. The music starts slowly and as the shark moves closer to it's prey the music speeds, similar to a heart beat speeding up as the tension and anxiety builds. ...read more.

This is used well in the first attack that takes place at night; you can hardly see what is going on except seeing wild thrashing and a little bit of splashing water, but loud screams are clearly heard. After the second attack Brody decides to research shark attacks and finds a book about them. In the book you see detailed pictures of the damage done to people's bodies after the attacks, there are pictures of people with half of their torsi bitten off and half a leg or limbs missing completely. The reaction of the characters are also used to show how big the shark is "we're gonna need a bigger boat." this makes us scared that they will be killed because the shark is actually bigger than their boat. The Director also uses false shark attacks to build fear, such as a woman screaming while being picked up, Brody couldn't see it and thought she was being attacked. Another example is an old man is swimming with a black cap on, making you think it is the shark's fin but then you see him emerge from the water. Finally there were two kids that were swimming with a cardboard cut-out shark fin, this was help further because there were helicopters, and people on boats with guns looking for the shark or any sign of an attack. ...read more.

see the shark go to attack Brody and Brody is desperately throwing anything he can find at the shark, he manages to shove a gas bottle in the sharks mouth, the shark however continues to attack and Brody reaches for his rifle. He shoots at the shark, hitting him several times. The shark breaks off his attack but then turns around and has another go, but Brody manages to get a shot at the gas canister, penetrating the pressurised bottle, it explodes and so does the shark. Brody is filled with relief and he falls into the water as the last of the boat sinks, bubbles appear near Brody, and you see Hooper emerge from the water. The rejoice, and you see as they make their way back to shore on a raft made from salvaged parts of the boat. Then the Credits roll. The part I found most scary was in the final section when the shark is eating Quinn, this is because you see the shark the most and there is a greater amount of gore than in the other attack, also you see as he tries to escape the shark but finally get caught and bitten. His still alive though and you can see him struggling and screaming in pain, but this also shows his refusal to be killed by a shark, which he has hunted for a better part of his life, but the shark eventually devours him completely. David George 10.A Page:1 ...read more.