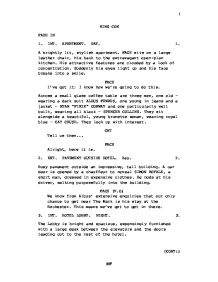 KING CON FADE IN 1. INT. APARTMENT. DAY. 1. A brightly lit, stylish apartment. FACE sits on a large leather chair, his back to the extravagant open-plan kitchen. His attractive features are clouded by a look of concentration. Suddenly his eyes light up and his face breaks into a smile. FACE I've got it! I know how we're going to do this. Across a small glass coffee table are three men, one old - wearing a dark suit ALBUS FEWKES, one young in jeans and a jacket - RYAN "FIXIE" CONWAY and one particularly well built, wearing all black - SPENCER COLLINS. They sit alongside a beautiful, young brunette woman, wearing royal blue - CAT CRUSH. They look up with interest. CAT Tell us then... FACE Alright, here it is. 2. EXT. PAVEMENT OUTSIDE HOTEL. Day. 2. Busy pavement outside an impressive, tall building. A car door is opened by a chauffeur to reveal SIMON ROYALE, a short man, dressed in expensive clothes. He nods at his driver, walking purposefully into the building. FACE (V.O) We know from Albus' extensive enquiries that our only chance to get near The Mark is his stay at the Rochester. This means we've got to get in there. 3. INT. HOTEL LOBBY. NIGHT. 3. The Lobby is bright and spacious, expensively furnished with a large desk between the elevators and the doors leading out to the rest of the hotel. ...read more.

He then edits the rota, ensuring he's working during the performance. 9. SPLITSCREEN - INT. HOTEL ROOM BATHROOM / APARTMENT BATHROOM. NIGHT. 9. Simon Royale is getting ready for the evening. He is in the shower, washing his hair. Simultaneously, Fixie is in his shower, obviously rinsing excess dark hair dye out of his hair. Simon Royale then wraps a towel around his waist and walks towards the basin. He looks in the mirror, mimics Elvis's famous Lip Curl, smirking at himself. At the same time, Fixie walks to his mirror and practices the Lip Curl, shaking his head at his attempts. Simon Royale then picks a comb out of his washbag and combs his hair flat to his head. Meanwhile, Fixie grabs a comb from the shelf under the mirror and combs his hair into an elaborate quiff. 10. INT. HOTEL ROOM / APARTMENT. CONTINUOUS. 10. Simon Royale pulls on another expensive suit, fixes his tie in the mirror and makes his way to the door of his room. Simultaneously, Fixie pulls on a 50s shirt, tucking it into tight black jeans, fixes his quiff and makes his way to the door of the apartment. 11. INT. HOTEL LOBBY. NIGHT. 11. Simon Royale emerges from the elevator, walking past the front desk where Cat stands, a fixed smile on her face. ...read more.

22. INT. HOTEL LOUNGE. NIGHT. 22. Fixie's song comes to an end, panic crosses his face as he realises the crowd will be expecting his next number. Albus hears the commotion in the courtyard and quickly opens the back door, allowing the yelling to distract the guests and the liberated animals to make their way in to the lounge. He then ducks back behind the bar and watches the chaos ensue. FACE Hey, is that a monkey?! As animals fill the room, Face, now sure his team will all make it out, leaves the lounge, quickly followed by Albus. The security guards, previously stationed in the lobby, appear at the sound of shouting guests. Simon Royale is clearly distressed and perplexed. A look of realisation crosses his face. He tears out of the Lounge. 23. INT. VAN PARKED ON STREET. NIGHT. 23. Spencer breathes a sigh of relief as he spots Face, Albus and Cat sprinting towards him. They enter the van, laughing. CAT Wait a minute, what about Fixie... did you see him get off the stage? SILENCE as they all realise they don't know where he is. PHONE RINGS, Spencer answers it SPENCER (On Phone) Fixie? Is that you? 24. EXT. STREET OPPOSITE HOTEL. 24. Police lights flash from across the street, groups of people and animals are forming outside the Hotel. Fixie stands watching the chaos, he puts the phone to his ear, and grins, satisfied. FIXIE (On Phone) Elvis has left the building. ?? ?? ?? ?? 1 MF ...read more.