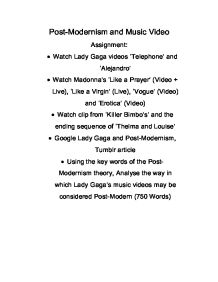 Post-Modernism and Music Video Assignment: * Watch Lady Gaga videos 'Telephone' and 'Alejandro' * Watch Madonna's 'Like a Prayer' (Video + Live), 'Like a Virgin' (Live), 'Vogue' (Video) and 'Erotica' (Video) * Watch clip from 'Killer Bimbo's' and the ending sequence of 'Thelma and Louise' * Google Lady Gaga and Post-Modernism, Tumblr article * Using the key words of the Post-Modernism theory, Analyse the way in which Lady Gaga's music videos may be considered Post-Modern (750 Words) Lady Gaga and Post-Modernism Lady Gaga is one of the largest selling artists of the 21st century, she is considered to be new and original, where in fact her work is the epitome of post-modern. When looking closely at her work, such as 'Telephone' and 'Alejandro' it exhibits a large amount of intertextual references taken, foremost, from Madonna, who also was considered a post-modern icon of the eighties. Additional references to 'Killer Bimbos', 'Thelma and Louise' and 'Kill Bill' are also made within these two videos. ...read more.

Furthermore the truck stop scene within 'Telephone' imitates the truck stop scene within 'Killer Bimbos', where the two main female characters shoot down a truck stop. The Video can be considered homage to iconic movies such as 'Thelma and Louise' and Tarantino's movies such as 'Kill Bill' and 'Pulp Fiction', as it is respectfully imitating the films narrative of strong women taking revenge without parodying them. There is also a fragmentation within the 'Telephone' video, in relation to Lady Gaga's character her identity seems to be fragmented, this is shown through her numerous costumes and 'looks' within the video as well as her different roles, victim, prisoner, chef etc... Additionally, it can be said that 'Telephone' creates a hypereality, that glamorizes prison lifestyle by showing inmates in heels and in a glam grunge style of clothing as well as this, 'Telephone' also creates a hypereality that glamorizes mass murder into somewhat of a musical. ...read more.

References Madonna's 'Voque' Lady Gaga also directly references Madonna's 'Vogue' video, as seen above, as Lady Gaga is seen in shots which closely resemble the style and image of 'Vogue'. Lady Gaga also references 'Cabaret' through imitating the character Sally Bowles where she has a dance/s*x scene with three men in twin beds wearing nothing but underwear. Lady Gaga could also be referencing Joan of Arc, when she is seen in her white nun costume. The video also shows bricolage as we see a variety of genres within 'Alejandro' such as war, action, romance, religion and music being blended and mixed to create a new style. The video can also be seen to create a hyper reality that is far different from our own, which shows women as superior and males as both largely submissive and also masculine. Fragmentation can also be seen within 'Alejandro', as with 'Telephone', Lady Gaga is seen in a range of costumes and looks, portraying a number of different roles. ...read more.