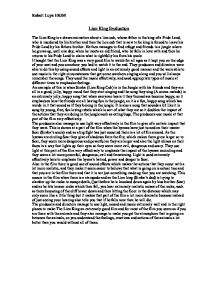 Lion King Evaluation The Lion King is a drawn animation about a lion cub, whose father is the king of a Pride Land, who is murdered by his brother and then the lion cub that is now to be king is forced to leave his Pride Land by his fathers brother. He then manages to find refuge and friends in a jungle where he grows up, until one day, when he meets an old friend, who he falls in love with and then he returns to his Pride Land to claim what is rightfully his from his uncle. I thought that the Lion King was a very good film to watch for all ages as it kept you on the edge of your seat and you somehow you had to watch it to the end. ...read more.

It is also a song that sounds a bit like it is sung by young, free, fun loving rebels which is sort of what they are so it doubles the impact of the actions that they are doing in the jungle such as eating bugs. The producers use music at that part of the film very effectively. The producers also manage to use light very effectively in the film to give of a certain impact that they want. This is shown at a part of the film when the hyenas have just turned on their master Scar (Simba's uncle) and as a big fight has just occurred there is a lot of fire around. As the hyenas are circling Scar they give of shadows from the fire, which makes them grow larger so to Scar, they seem more dangerous and powerful as they are larger and also the light shines on their faces in a way that lights up their eyes so they seem more evil, dangerous and scary. ...read more.

and as he hits loosen rocks which then fall, you hear extremely realistic noises of the rocks, such as them bouncing of the cliff lower down and then hitting the floor in the distance which may only seem like a little thing but it makes that part of the film a lot more dramatic because instead of just seeing your hearing also tells you that if he falls now then he will die. The producers and directors manage to use light, sound and music extremely well and in the right places to make The Lion King an extremely good film and for most of the film you seem as if you are there with the animals and they also manage to make you get the atmosphere that is going on between the animals, so you understand the feelings, emotions and actions of the animals a lot better than you would without all of these. Robert Luya 10GM ...read more.