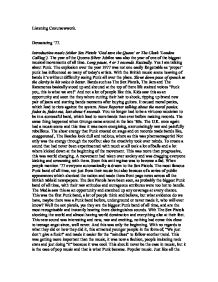 Listening Ccoursewwork. Devastating '77. Introduction music (either Sex Pistols 'God save the Queen' or The Clash 'London Calling'). The year of the Queens Silver Jubilee was also the year of one of the biggest musical movements of all time. Long pause, 4 or 5 seconds. Excitedly. Yes I am talking about Punk. The explosion over the year 1977 was not one easily forgettable as 'proper' punk has influenced so many of today's artists. With the British music scene heaving of bands it's without difficulty seeing Punk all over the place. Slows down pace of speech so the clarity in his voice is better. Bands such as The Sex Pistols, The Jam and The Rammones basically stood up and shouted at the top of there life stained voices "Fuck you, this is what we are!" And not a lot of people like this. Kids saw this as an opportunity and soon the they where cutting their hair to shock, ripping up brand new pair of jeans and starting bands moments after buying guitars. It caused moral panics, which lead to riots against the system. News Reporter talking about the moral panics, fades in, fades out, last about 4 seconds. ...read more.

This new sound was interesting and new, raw and exciting, nothing had come this close to teenage angst since, well never. And this was only the beginning. With no regards to what they did or how they did it, this attracted younger people in the form of, "We just don't give a fuck!" and made it easier for the "mindless" to follow another trend. This was getting more important than the music, it was now a fashion, people imitating rock stars and just doing "it" because it was cool. This should never be the case in music, but it is the case of pop music and that is what Punk became. Popular music. Just like all the other bands the Sex Pistols had become a fad. And just like any other fad it spread amongst other ruthless teenagers waiting for their turn in this fight. This soon saw bands exploding all over the country. Such as The Rammones, Blondie, Siouxsie and the Banshees and of course The Clash. Pause. The Clash taking a more melodic approach to what the Sex Pistols had created but this were still Punk, and I personally think at its best. ...read more.

Rock doesn't change anything." How wrong could he be? In terms of musically and, to a certain extent, culturally things did change. Image, style and attitudes changed. Musically it added a whole new spectrum of what could be done with so little and so effortlessly. One of Punk's strong points was the lyrics, the working class lyrics of a working class hero. And, by effecting society for it to change and to contradict the emotions it certainly did change a thing or two. Punk also lead to some more melodic music, with bands like The Jam making songs ten times as cleaver as the Pistols or The Clash, even together. You got this new sort of thing, which was similar to Punk only more harmonious. And Joy Division taking the boundaries of Punk a little further, taking what they liked off certain stuff and basically chucked them in together. Luckily this worked out. Although this process of how Punk came about seems to have not been a struggle it was, for some. For some it came over night, almost instantly. But still there was a lot of blood, sweat and tears, the opposite to sex, drugs and rock 'n' roll. This was the true story of a devastating '77. The destruction of music as we once knew it. Smugly. After all isn't destruction a form of creation? 1263 ...read more.