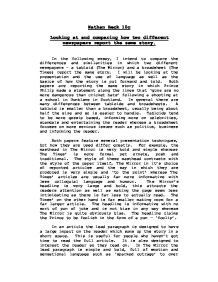 Looking at and comparing how two different newspapers report the same story.

Nathan Beck 10c Looking at and comparing how two different newspapers report the same story. In the following essay, I intend to compare the differences and similarities in which two different newspapers - a tabloid (The Mirror) and a broadsheet (The Times) report the same story. I will be looking at the presentation and the use of language as well as the basics of how the story is put forward and told. Both papers are reporting the same story in which Prince Philip made a statement along the lines that 'guns are no more dangerous than cricket bats' following a shooting at a school in Dunblane in Scotland. In general there are many differences between tabloids and broadsheets. A tabloid is smaller than a broadsheet, usually being about half the size and so is easier to handle. Tabloids tend to be more gossip based, informing more on celebrities, scandals and entertaining the reader whereas a broadsheet focuses on more serious issues such as politics, business and informing the reader. Both papers feature several presentation techniques, but how they are used differ greatly. For example, the masthead in The Mirror is very bold and simple whereas The Times' is more formal yet ornate, posh and traditional. ...read more.

The Times uses only one, very small picture, which is neutral and doesn't make the Prince seem bias on foolish at all. The presentational features in both papers are very different and contrast in many ways. It is very interesting how the same story can be told in completely different ways just by how it is displayed. But also, a very significant difference between the two articles is the use of sensational and informative language and the effect of bias. Sensational language is language that makes the story sound incredibly interesting and exciting as although usually over exaggerates the point. For example, something 'bad' becomes 'tragic' or 'horrifying'. Sensational language is most often found in tabloids such as The Mirror. On the front page alone there are many examples of sensational language such as 'Gun Storm' in the headline. A mere stupid statement regarding guns has suddenly hit the headlines and is made to sound atrocious and extremely serious. In the lead paragraph there is another example: 'sparked outrage' where a line like 'has caused anger' or such could have been used - sensational, over the top language has been used to make the article sound far more interesting than it actually is. ...read more.

A paper may also be bias if it is against a particular person or group of people, in the case of The Mirror - the royal family in particular. The 'readership' of a paper is the type of people that generally read that particular paper and so are the type of people the paper is aimed at and designed for. The readership of a tabloid such as The Mirror, are traditionally 'blue collar' workers who have less time to read and generally have a lower reading stamina (reading stamina is the average length of reading someone can do before loosing attention). Thus these papers are easier to read as they have less text, more pictures and simpler language. The readership of a broadsheet such as The Times tends to be those with a high reading stamina who demand in-depth reporting. An example of these people include those with more time, for example when travelling such as businessmen, lawyers and teachers. These papers have far more text and less pictures and are often linked to education. The Mirror and The Times both tell the same story in very different ways as I have explained in this essay. It is a fact that The Mirror uses more sensational language and bias than The Times, which uses more informative and factual language and is far more neutral. 2 ...read more.