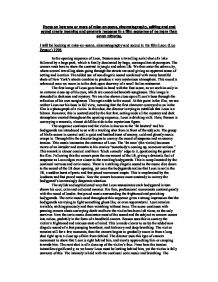 Looking at mise-en-scene, cinematography and sound in the film Leon (Luc Besson) 1994.

Focus on how one or more of mise-en-scene, cinematography, editing and and sound create meaning and generate response in a film sequence of no more than seven minutes. I will be looking at mise-en-scene, cinematography and sound in the film Leon (Luc Besson) 1994 In the opening sequence of Leon, Besson uses a travelling aerial shot of a lake followed by a huge park, which is finally dominated by huge, cosmopolitan skyscrapers. The camera rests here to show the contrast in jungle and urban life. We then enter the urban city, where several travelling shots going through the streets are used giving an apparent sense of setting and location. The added use of non-diagetic sound combined with many beautiful shots of New York's streets combine to produce a very mysterious atmosphere. This mood is enhanced once we zoom in to the dark open doorway of a small Italian restaurant. The first image of Leon goes hand-in-hand with the first scene, as we see him only in an extreme close-up of his eyes, which are concealed beneath sunglasses. ...read more.

This is complimented by the continual nervous and eerie music. There is a striking diagetic sound as the music dies down to the sound of the lift door opening, yet once the bodyguards realise that Leon is not in the lift, a sudden burst of panic and fast paced movement erupts. This is emphasised by the loudness and fast paced music. Now the camera becomes more unsteady to convey the bodyguard's increasingly desperate situation. The stylish and sophisticated way that Leon assassinates each bodyguard in turn shows his cool, calm and collected manner. His firm, professional movements contrast greatly with the mood of louder, fast paced music surrounding the frightened and panicking bodyguards. The eerie music used throughout this sequence gives a strong impression that the bodyguards are trying to fight something ghost-like, or even supernatural. Leon remains invisible, striking precisely and then vanishing without trace. The scene continues with panning camera shots conveying death and how the victim has been left alone, as the only survivor. ...read more.

As a result of this, an implication of humour is added. This results in a drop in the intense suspense of the scene, and the atmosphere is almost calm. However, once Leon is told by his boss to "make him understand, then let him go," intense and sinister sound effects creep in and the mood transforms entirely, adding tension and trepidation. However, this is only short lived, as Leon only makes the victim say "I understand," which again adds humour. Leon slips back into the shadows with ghostly and mystified sounds following his exit. These sounds reinforce his sinister and mysterious nature. Although admittedly some scenes have a comical side to them, Besson's fast paced action and gruesome images hold the tension and suspense brilliantly. His use of close-ups and camera movements, especially the subjective stance used by the victim, convey the feelings felt by the characters and the way in which they behave. Sound plays a crucial role in the opening sequence because, in my view, it is used to control the level of suspense and intrigue. ...read more.

I think this is a very strong analysis of the emotional impact of a well directed action sequence, and the author is beginning to use the technical language of film studies very naturally. All it is lacking is a little reflection on the "deeper meaning" of the scene in general, in the form of some discussion of the very fine moral line that Besson is walking with the way he characterises Leon.

Think about it: Is Leon a "good guy" in the traditional sense of this term? If he's not a good guy, why do we like him?

This essay reveals some of the ways that Besson pulls off the very difficult trick of making us identify with Leon, and to think of him as a sympathetic and attractive character even though he is basically an emotionally retarded multiple murderer.

How can we identify with a murderer while still being able to believe that we are "nice people"? How does Besson help us to do this? Think about how his careful blend of comedy and violence keeps you hooked into the narrative; or the way he presents Leon as "a kind of innocent" and also as "a kind of god"; or the way he makes sure Leon's lethal fury is only ever directed at clearly identified "bad guys" etc.

Current grade: The detail and depth of the analysis, and the natural use of the technical language, means this essay merits 3.5 stars.