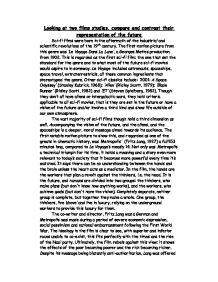 Looking at two films studies, compare and contrast their representation of the future (Planet Of The Apes and The Matrix)

Looking at two films studies, compare and contrast their representation of the future Sci-fi films were born in the aftermath of the industrial and scientific revolutions of the 19th century. The first motion picture from this genre was 'Le Voyage Dans La Lune', a Georges Meties production from 1902. This is regarded as the first sci-fi film; the one that set the standard for the genre and to what most of the future sci-fi movies would aspire to in someway. Le Voyage includes astronauts, spaceships, space travel, extraterrestrials, all these common ingredients that stereotyped the genre. Other sci-fi classics include: '2001: A Space Odyssey' (Stanley Kubrick, 1968); 'Alien' (Ridley Scott, 1979); 'Blade Runner' (Ridley Scott, 1982) and 'ET' (Steven Spielberg, 1982). Though they don't all have aliens or intergalactic wars, they hold criteria applicable to all sci-fi movies, that is they are set in the future or have a vision of the future and/or involve a third kind and show life outside of our own atmosphere. The vast majority of sci-fi films though hold a third dimension as well. Accompanying the vision of the future, and the aliens, and the spaceships is a deeper, moral message aimed towards its audience. The first notable motion picture to show this, and regarded as one of the greats in cinematic history, was 'Metropolis' (Fritz Lang, 1927) a full153 minutes long, compared to Le Voyage's measly 14. Not only was Metropolis a technical triumph for its time, it holds a meaning and a story even more relevant to today's society that it becomes more powerful every time it's watched. It says there can be no understanding between the hands and the brain unless the heart acts as a mediator. In the film, the hands are the workers that plan a revolt against the thinkers, i.e. the head. It is the future, and humans are divided into two groups: the thinkers, who make plans (but don't know how anything works), and the workers, who achieve goals (but don't have the vision). ...read more.

Perhaps Shaffner didn't have this same pressure in the sixties, but then again POTA isn't an action movie. POTA is there to exercise the conscience, and the pace sets the audience in the right frame of mind to receive the final scene. If a similar twist were to happen in The Matrix it wouldn't have any where near the same effect because it's the suddenness and shock of the reality that Shaffner relies upon to create the emotional effect. This difference in style is also orchestrated by the cinematography. Plenty of natural light is used in POTA, and even in interior scenes, it's spread evenly throughout the room so there are very little shadows and darkness in any situation; the film is surprisingly light, in both senses, considering the plot. The director of photography, four-time Oscar winner Leon Shamroy ('Cleopatra', 'South Pacific', 'The King And I') in his penultimate film, used a very wide scope (Cinemascope 55) to shoot the film and you can feel the aura it creates; a large, faintly lit frame is used and not much put within it. The mis-en-scene is kept to a minimum by production designer Walter Scott, long time collaborator with both Hugh S. Fowler and Leon Shamroy, again to aid to the mood of the shots. He keeps the sets light and clutter free, which not only reduces shadows but also doesn't steal the eye away from the not-so-subtle acting of Charlton Heston. All these aspects, the editing, the cinematography and the mis-en-scene, are manipulated by Shaffner in order to anchor the final scene. In a total contrast, the Wachowski's use these aspects to create an opposite effect. Cinematographer Bill Pope shot a much darker picture, the scenes are tenebrous which makes for a much more intense experience, plenty of greens and greys and blacks filter the light creating a shady, gloomy world. The set design and dress code also add to this. ...read more.

Neo doesn't start the film a hero; he's just normal Thomas A. Anderson. The story then follows Neo through his realisation that he is 'the one', his slow awakening to the powers he has and then finding and carrying out his destined mission, � la Spiderman (Sam Raimi, 2002). For this reason, the characters around him act differently than the characters around Taylor; the characters around Neo don't recognise his superiority at first just as the audience doesn't either, so Neo has to prove himself to both. Therefore, the other men in The Matrix aren't portrayed as weakly as they are in POTA, it's not up to them to slip up, it's up to Neo to rise above by his own accord. Taylor is the total opposite of Neo's hero. Charlton Heston is steely jawed, hard bodied, terse in speech, an American man's man, a hero unto himself. His s****l appeal is more compatible with females of the equivalent age, who in the sixties, were a much larger cinematic market than today where the primary market is the teenage audience to whom Keanu Reeves would appeal more to. Heston has portrayed many hero's and epic characters in his time including Henry VIII, Marc Anthony, Michelangelo, John the Baptist, El Cid, Moses and of course, Ben Hur. As mentioned, choosing such a burly veteran to play the main action hero was a sign of the times, and there are many other features of the sixties which are reflected in the film. The sixties will always be remembered for the rise of teen culture, free love and flower power, and many indiscreet references in the film are made to this culture. For a start, male nudity would have been frowned upon until then, but POTA includes a scene with male nudity in. What's more, this scene is only included for the sole purpose of showing nudity because the scene doesn't advance the plot in any way whatsoever. It's just included to send out a message to the audience that the film is in with the times. ...read more.