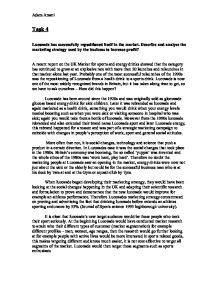 Lucozade has successfully repositioned itself in the market. Describe and analyse the marketing strategy used by the business to increase profit

Task 4 Lucozade has successfully repositioned itself in the market. Describe and analyse the marketing strategy used by the business to increase profit? A recent report on the UK Market for sports and energy drinks showed that the category has continued to grow at an explosive rate with more than 20 launches and relaunches in that market alone last year. Probably one of the most successful relaunches of the 1990s was the repositioning of Lucozade from a health drink to a sports drink. Lucozade is now one of the most widely recognized brands in Britain, but it has taken along time to get, so we have to ask ourselves - How did this happen? ...read more.

In Lucozades case it was the social changes that took place in the 1980s. Britain's economy was booming, the so called 'yuppie' was invented and the whole ethos of the 1980s was 'work hard, play hard'. Therefore no doubt the marketing people at Lucozade saw an opening in the market, energy drinks were now not just about the sick or the elderly but could be for the successful business man who is at his desk by 7am at and at the Gym or squash club by 7pm. When lucozade began developing their marketing strategy, they would have been looking at the social changes happening in the UK and adapting their scientific research and formulation to prove and demonstrate that the new lucozade would improve for example an athletes performance. ...read more.

One of the last stages is advertising and sales promotions, probably the most effective way of creating brand awareness, which in turn ensures long term visibility and in locozade case growth in sales and market share. Lucozade used many different marketing ploys to achieve this, by advertising on TV using popular sports personalities and sponsorship campaigns involving various sports. In conclusion not all repositioning of a brand or even rebranding is successful, what made lucozade a success was its ability to once they had found out who their target audience was they could then seek to find out what those customers want and then through new product development produced and delivered those requirements more effectively than their competitors. Adam Amari ...read more.