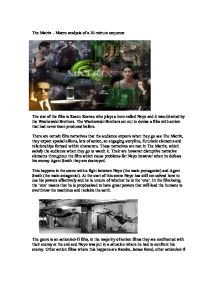 The Matrix - Macro analysis of a 10-minute sequence The star of the film is Keanu Reeves who plays a hero called Neyo and it was directed by the Wachowski Brothers. The Wachowski Brothers set out to devise a film with action that had never been produced before. There are certain film narratives that the audience expects when they go see The Matrix, they expect special effects, lots of action, an engaging storyline, futuristic elements and relationships formed within characters. These narratives are met in The Matrix, which satisfy the audience when they go to watch it. Their are however disruptive narrative elements throughout the film which cause problems for Neyo however when he defeats his enemy Agent Smith they are destroyed. This happens in the scene with a fight between Neyo (the main protagonist) and Agent Smith (the main antagonist). At the start of this scene Neyo has still not solved how to use his powers effectively and he is unsure of whether he is the 'one'. ...read more.

Like many action films there is always a damsel in distress that needs rescuing. When Neyo battles agent Smith the scene is highly choreographed and contains CGI. The use of the stunts shows powerful abnormal human abilities, which create excitement and engagement from the audience. Action/sci-fi films usually have an action scene where the main character performs a spectacular stunt. There are many in The Matrix however there is a key one during this battle. With the help of special effects Neyo does a backward somersault out of a railway track leaving Agent Smith their in an attempt to try and defeat him. Neyo is unsuccessful in defeating Agent Smith because of his ability to shape-shift. As with many climatic sequences in action films, the action hero is not always in control, Neyo realizes he is no match for Agent Smith so he has no choice other than run from him and his other agents. Neyo runs through an unspecified (known as the matrix) ...read more.

This is used to show that it is in a world that we are in but to convey it is not real. In the real world (the future world) it is totally unrecognizable because it's in the future and everything is futuristic which is shown in all sci-fi films. Neyo is eventually caught by the Agents and Agent Smith shoots him 4 times. In many action films there is a moment where you think that our action hero is defeated. For instance in the Fifth Element where Corbin (action hero) cannot figure out how to light the stones to save the world from destruction. When Neyo is shot the camera shows a close-up shot of Neyo realizing that he is dead but then he comes back to life because he really is the 'one'. The Agents try shooting at him again but he stops the bullets. He then fights Agent Smith and destroys him so the other two Agents flee. This sequence shows a narrative and genre that are similar in many other action/sci-fi films that are recognizable to an audience. ...read more.