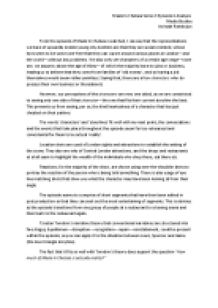 Made In Chelsea Analysis of an episode

﻿Made In Chelsea Series 3 Episode 4 Analysis Media Studies Avinash Rambojun From the episode of Made In Chelsea I watched, I can say that the representations we have of upwardly mobile young city dwellers are that they are social-oriented, whose lives seem to be some care-free that they can cavort around various places in London?and the world?without any problems. We also only see characters of a certain age range?none are, we assume, above the age of thirty?of which the majority have no jobs or business, leading us to believe that they come from families of ?old money?, and so having a job themselves would seem rather pointless. ...read more.

This prevents us from seeing, per se, the kind heartedness of a character that has just cheated on their partner. The words ?characters? and ?storylines? fit well with my next point; the conversations and the events that take place throughout the episode seem far too rehearsed and coincidental for them to be actual ?reality?. Location shots are used of London sights and attractions to establish the setting of the scene. They also are only of Central London attractions, and the shops and restaurants et al all seem to highlight the wealth of the individuals who shop there, eat there etc. ...read more.

The episode seems to comprise of short segments that have then been edited in post production so that they can seek out the most entertaining of segments. This is obvious as the episode transitions from one group of people at a restaurant to a boxing arena and then back to the restaurant again. Tzvetan Torodov?s narrative theory that conventional narratives are structured into five stages; Equilibrium?disruption?recognition?repair?reinstatement, could be present within the episode, as you can apply it to the situation between Louis, Spencer and Jamie (the love triangle storyline). The fact that it fits so well with Torodov?s theory does support the question ?How much of Made In Chelsea is actually reality?? ...read more.