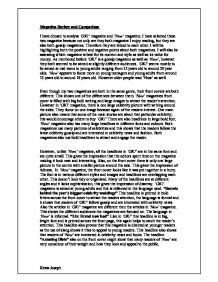 Magazine Review and Comparison I have chosen to analyse 'OK!' magazine and 'Now' magazine. I have selected these two magazine because not only are they both magazine I enjoy reading, but they are also both gossip magazines. Therefore they are linked to each other. I will be highlighting both the positive and negative points about both magazines. I will also be assessing which magazine is best for its content and style as well as its value for money. As mentioned before 'OK!' is a gossip magazine as well as 'Now', however they both seemed to be aimed at slightly different audiences. 'OK!' seems mostly to be aimed at mid teens to young adults ranging from 15 years old to around 20 year olds. 'Now' appears to focus more on young teenagers and young adults from around 13 years old to around 18 years old. However older people read 'Now' as well. Even though my two magazines are both in the same genre, their front covers are both different. This shows one of the differences between them. 'Now' magazines front cover is filled with big bold writing and large images to attract the reader's attention. However in 'OK!' magazine, there is one large celebrity picture with writing around the sides. They focus on one image because again of the readers interest. One main picture also means that some of the main stories are about that particular celebrity; this would encourage others to buy 'OK!' There are also headlines in large bold font. 'Now' magazine also has many large headlines in different fonts and colours. ...read more.

'Now' is a gossip magazine although it contains a variety of articles which would interest other readers (travel etc.) 'OK!' magazine also contains good articles and the layout is neat, the front cover is eye catching and organized. 'OK!' also is a gossip magazine and like 'Now' it also contains a variety of articles. The language in both 'Now' and 'OK!' is informal and this shows the age group aimed at. By comparing both magazines 'OK!' magazine seems to be better for value for money, 'OK!' is more thicker then 'Now' and contains more articles. 'OK!' magazine is worth �2 and readers may take longer to read it. 'Now' magazine is priced quite reasonably at �1 however it has fewer articles then 'OK!' and 'Now' can be read quickly by just quickly glancing through. 'OK!' is also better at level of interest. 'OK!' has much more interesting and longer articles then 'Now'. Also it has a mixture of articles and has more articles then 'Now'. However when looking for a magazine 'Now' is most likely to attract the reader's attention as it is bright and bold and stands out in the crowd. Personally I would recommend both 'OK!' and 'Now' magazine but in two different situations. I would recommend 'OK' to someone who enjoys reading long articles and who spends time reading magazine, perhaps at home. I would also recommend 'OK!' mainly due to its content and its layout. However I would recommend 'Now' to someone who perhaps doesn't like to spend a lot of time reading magazines but likes to casually glance through on the bus etc. ?? ?? ?? ?? Kezia Joseph ...read more.