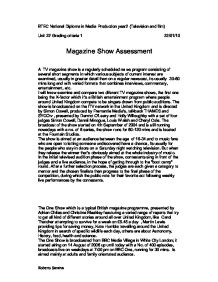 BTEC National Diploma in Media Production year2 (Television and film) Unit 22 Grading criteria 1 22/01/10 Magazine Show Assessment A TV magazine show is a regularly scheduled news program consisting of several short segments in which various subjects of current interest are examined, usually in greater detail than on a regular newscast, its usually 30-60 mins long and with varied formats that combines interviews, commentary, entertainment, etc. I will know examine and compare two diferent TV magazine shows, the first one being the X-factor which it's a British entertainment program where people around United Kingdom compete to be singers drawn from public auditions. The show is broadcasted on the ITV network in the United Kingdom and is directed by Simon Cowell, produced by Fremantle Media's, talkback THAMES and SYCOtv , presented by Dermot O'Leary and Holly Willoughby with a set of four judges Simon Cowell, Dannii Minogue, Louis Walsh and Cheryl Cole. ...read more.

The One Show which is a typical British magazine programme, presented by Adrian Chiles and Christine Bleakley feauturing a varied range of reports that try to get all kind of different stories around all over United Kingdom, like Carol Thatcher attempting to survive for a week on �8.45 a day , Martin Lewis providing tips for saving money, Kate Humble travelling around the United Kingdom in search of specific wildlife each day, others are about Astronomy, History, food, health and science. The One Show is broadcasted from BBC Media Village in White City London; it started airing on 14 August of 2006 up until today with a No. of 400 episodes, broadcasts live on weekdays at 7:00 pm on BBC One, running for 30 mins. Is aimed mainly at adults and family orientated audience. ...read more.

the 4 judges with a diffrent kind of personality to them and is usually 60-120 mins long, while The One Show we only have two presenters who are sitting on a couch giving us the news and usually one guest to intereact with, the rest its documentaries and interviews made by the reporters and is usually 30 mins long, so less viewing time. While X-factor is broadcasted in the ITV network and peaked at 19,7 million UK viewers, The One Show is broadcasted on the BBC and its highest audience figure to date was only 5.1 million viewers. In the end X-Factor its more of a Interactive reality talent show, where the audience can enguage with the show, so its more pointed towards entertainment while The One Show its more of a informative program with the objective of informing the viewer and educate. ?? ?? ?? ?? Roberto Saraiva ...read more.