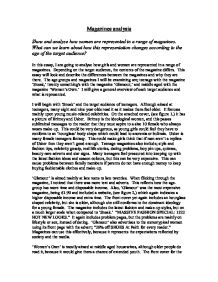 Also, 'Glamour' was the most expensive magazine, being �1.90 and included a website, (see figure 2,) which again indicates a higher disposable income and extra time. The front cover yet again includes an hourglass shaped celebrity, but she is older, although she still conforms to the dominant ideology for a young female. The magazine includes the latest fashion and make-up styles, but on a much larger scale when compared to 'Sneak.' "MASSIVE FASHION SPECIAL: 1322 HOT NEW LOOKS." It again includes problem pages, but the problems are mainly on lifestyle or s*x, instead of dating. 'Glamour' also advertises to the stereotypical women using its front page with the advert; "20% off SHOES At Faith for every reader." Magazines can use this effectively, because it represents the expectations reflected by society and the media. 'Women's Own' is mostly aimed at middle aged housewives, although older people do read it, because it would give them a chance of extended youth. The front cover for the magazine, (see figure 3,) ...read more.

This portrays the reader. Most modern middle aged women have jobs and still look after their children, and therefore would not have enough time to read the magazine. All three magazines reflect the target audience and the dominant ideology for that age group. The teenage ideology is to be a rich and famous celebrity which is represented by Britney Spears. Many teenagers see her as a role model and would like to become her as they grow older. The twenty something's ideology is to be rich with as little effort as possible and this is represented through Paris Hilton. With being the great granddaughter of Conrad Hilton, the owner of the Hilton hotels, she was born into wealth. Many young women would like to be her; doing occasional modelling and being rich enough to live a life of luxury. The middle aged magazine reflects the more realistic and practical aspects of life. This is represented by soap characters and their 'ordinary' lives. Readers of this category are more down to earth and have a different approach to life because they have more responsibilities. By Emma Holgate ...read more.