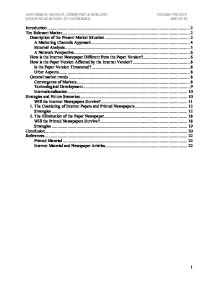 Many Swedish newspapers publish all or parts of their articles and advertisements on the Internet. The Internet newspapers are faced with several problems - one of them is to reach profitability.

An important aspect of profitability is gaining income. We believe that to avoid cannibalisation of the paper version, the different newspaper versions must cooperate. The major strategies that we suggest are finding ways to gain income from the online paper and managing a constructive cooperation between the paper version and the Internet version of the newspaper. Strategies The strategies suggested can be divided into different levels. On the highest, structural level are strategies to position and differentiate the Internet newspapers as well as cooperation between the Internet version and the paper version. On a lower level we suggest strategies to earn income - an important aspect of profitability. Differentiation and Positioning As mentioned before, the newspapers on the Internet are facing economic problems. One solution to these problems would be to differentiate themselves from the printed newspaper and thereby provide a different product. This could also facilitate the customers' willingness to pay for the service. The Internet newspaper has to utilize the Internet phenomenal characteristics and abilities. The site must develop and renew the services that already exist. The head of the department of media-science Nils Enlund at the Royal Institute of Technology, KTH Stockholm, claims that the development has to go in a leisure-emphasized direction. This could be one way to get the customers to pay. However, before the sites have developed in this direction it would not be possible to charge the customer. Some examples of leisure activities could be shorter cuts from movies, easy computer-games, and different chat functions available on the site. A very important point however, is that you as a manager try to create your own site that differs in one-way or another from competitors.29 This strategy would be most appropriate and easier to implement for the group Evening Newspapers since they are already inclined towards leisure and entertainment. An activity that could be used for both entertainment and business is chatting. ...read more.

Customers could be charged indirectly through cooperation with Internet distributors. This method has however also some difficulties. Another way to gain income is to sell articles to sites that function as "information centres". We believe that the major source of income for the online papers will come through advertising. The clicking-system with pop-ups that exist today is annoying and has a relatively very small value for the online papers. Online newspapers should in the future be able to match the high incomes TV gets through commercials. One factor that we believe can make this happen is the increased usage of the Internet and the convergence of media. Advertisements and commercials on the Internet have to be made more entertaining. We think that in a longer perspective the paper version of the newspapers might be eliminated from the market. E-books may then have taken over the role of the paper newspapers, offering the same advantages that these have offered in the past. We believe that many of the strategies suggested for the online papers in a shorter perspective will be applicable even after this development. A new business opportunity that could be explored is offering "subscription packages" where the customer buys an E-book together with the services of a company. Another business opportunity that companies should look out for is the convergence of markets. Companies might be able to offer customers much more than news alone as their product. Internet newspapers might not be profitable today but they can all probably see the great future opportunities. We believe that a key success factor in this process will be to understand the behaviour of customers. A criticism to the question examined in this paper is that the coexistence of printed newspapers and Internet newspapers might not be desirable for a company. During a panel debate held at SSE, Mattias Fyrenius (SVD N�ringsliv), implied that newspapers would gladly get rid of their distribution and printing costs and sacrifice the printed newspaper for a profitable digital alternative. ...read more.