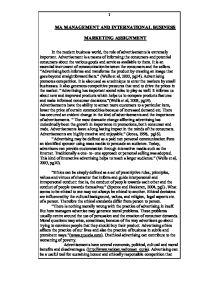 MA MANAGEMENT AND INTERNATIONAL BUSINESS MARKETING ASSIGNMENT In the modern business world, the role of advertisements is extremely important. Advertisement is a means of informing the consumers and potential consumers about the various goods and services available to them. It is an essential instrument of communication between the consumers and the sellers. "Advertising both informs and transforms the product by creating an image that goes beyond straightforward facts." (Wells et al, 2003, pg14). Advertising promotes competition. It is also used as a technique to enter the markets by small businesses. It also generates competitive pressures that tend to drive the prices in the market. "Advertising has important social roles to play as well. It informs us about new and improved products which helps us to compare products features and make informed consumer decisions."(Wells et al, 2003, pg14). Advertisements have the ability to attract more customers to a particular item, lower the price of certain commodities because of increased demand etc. There has occurred an evident change in the kind of advertisements and the importance of advertisements. " The most dramatic change affecting advertising has undoubtedly been the growth in importance in promotions, both consumer and trade. Advertisements leave a long lasting impact in the minds of the consumers. Advertisements are highly creative and enjoyable." (Jones, 1998, pg16). ...read more.

Advertising sometimes is used to promote products and inculcate attitudes and forms of behaviour contrary to moral norms. That is the case, for instance, with the advertising of contraceptives, products harmful to health, and with government-sponsored advertising campaigns for artificial birth control, so-called "safe s*x", and similar practices. Such kinds of advertisements do greater harm to the moral values of people especially in the developing countries. SEXUALITY AND ETHICS IN ADVERTISING "Historically, the trend in advertising has been to eroticise women more often than men. However, in recent years we have begun to see young men portrayed in a similar manner, though you are still more likely to see women sexualised in advertisements." (http://www.media-awareness.ca). The presence of s****l appeals in advertising is very pervasive in much of the world. The use of such appeals is constantly in terms of ethics and morality. "The issue of sexuality in advertising is what Boddewyn has called a 'soft- issue' based in complex subjective and socially/ culturally constructed roots and values. It is too complicated to be addressed merely by controlling or regulating the frequency of s****l appeals used." (Gould, 1994). "Sometimes when sexuality is used in advertising, certain values and attitudes towards s*x are being 'sold' to consumers along with the products."(http://www.media-awareness.ca). ...read more.

"Advertising industry must adopt a harm- minimisation policy by which bad and harmful consequences from various advertising practices and strategies shall be, if not eliminated, at least minimised. Only this will help to develop ethical advertising. For this purpose, proper ethical policies that include adequate ethical training for practitioners, codes of ethics and adequate self- regulative ethical controls by way of rewards and penalties should be adopted by the advertising industries as a whole. Ethical advertising helps to create a cultural environment, which is not only responsive to ethical advertising but also has individual who are pro- active in enhancing the ethical possibilities of advertising that meet the challenges of its hybrid and paradoxical nature." (Spence and Heekeren, 2004, pg119). "Advertising is morally neutral in itself and as long as advertiser's respect people's freedom to make choices without pressure about goods and services advertisers are perfectly justified in telling people, even persuasively, what they have to sell." (Williams, 1992). Advertisers must be vigilant about what they are advertising, how they advertise etc. in today's society, advertising has a profound impact on how people understand life, the world and to a great extend themselves, especially in regard to their values and their ways of behaving. "Advertising can be conceived and conducted not merely in an ethically neutral manner, a category in which a lot of advertisements fall, but in appositively ethical manner." (Spence and Heekeren, 2004, pg122). ...read more.