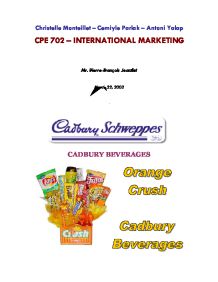 Christelle Monteillet - Cemiyle Parlak - Antoni Yalap CPE 702 - INTERNATIONAL MARKETING Mr. Pierre-Fran�ois Jeandet March 22, 2003 Marketing Case Study CADBURY BEVERAGES Relaunching Crush Brand Summary Page Introduction 3 I - The carbonated soft drink industry 4 A) An introduction 4 B) The industry structure 4 C) The industry economics 5 D) Product and brand categories 6 E) Soft drink purchase and buyer behavior 6 II - Changes in the orange category between (1985-1989) 7 A) The situation 7 B) Market shares and market coverage 7 C) Advertising and positioning 8 D) Brand positioning map 10 III - Cadbury's competitive position in the US soft Drinks' market and orange category 11 A) Introduction 11 B) SWOT Analysis 11 C) Key Success Factors 12 IV - Media Advertising for the major brands 13 V - Pro Forma Income Statement for Orange Crush 14 A) Forecast of $ sales 14 B) Pro forma income statement 14 VI - Crush's objective and strategies in terms of advertising and promotion 15 Conclusion: Crush orange positioning recommendations 16 Introduction Cadbury is the beverage division of Cadbury Schweppes PLC, a major global soft drink and confectionery marketer. The turnover of the company was, in 1989, $4.6 billion and the company was present in 110 countries. Cadbury Beverages' headquarters are in Stamford, Connecticut. Cadbury Schweppes PLC was the world's first soft-drink maker. The first product was an artificial mineral water marketed in 1783, in London. There is an important point to set the brand image. Cadbury Schweppes PLC expanded all over the world, especially in the British Commonwealth. In 1969, Schweppes decided to diversify into food products and merged with Cadbury, a major British candy maker who began its business in 1830. ...read more.

15 % Other brands 28.6 % 28.6 % TOTAL 100 % E) Soft drink purchase and buyer behavior The purchase of soft drinks in supermarkets is often unplanned. Buyers respond favorably to price promotions, in-store displays and other promotions. The supermarket has a key function in the sales. The classic supermarket buyer is a married woman with children under 18 years living at home. Soft drinks' buying is seasonal: the consumption is a little bit higher during summer months. The consumption depends also on regions. Per capita consumption in the East South Central states was highest in 1989. This region consumed 54.9 gallons whereas the national per capita average was 46.7 gallons (a gallon equals almost 4 liters). The lowest consumption was in the mountain states (37.1 gallons). Consumption of diet beverages was more important among consumers over 25 years. Teenagers and younger consumers preferred regular soft drinks. II - Changes in the orange category between 1985 and 1989 A) The Situation The orange flavored drinks' sales increased between 1984 and 1989. Thanks to heavy investment made by Coca-Cola (Minute Maid) and PepsiCo (Mandarin Orange Slice), the number of cases raised rapidly. 126 000 000 cases of orange-flavored soft drinks were sold in the supermarkets in 1989. So, the total is (with fountain service and retailers) is: 126 000 000 * 2.5 = 315 000 000 cases In 1989, four brands were leaders on the market: * Mandarin Orange Slice (PepsiCo) * Sunkist (Cadbury Beverages) * Minute Maid Orange (Coca-Cola) * Orange Crush (Cadbury Beverages) * Others B) Market shares and market coverage Below, we can see the graphics of the relationship between market share and market coverage for four brands. ...read more.

Concerning the local campaign, we will use TV commercials, radio, flyers, outdoor billboards, newspapers. We will also use incentive bonuses on sales with bottlers (for example we will allow them 15 to 25 cents per case sold). Conclusion: Crush orange positioning recommendations There are different possibilities concerning Crush's positioning such as: 1. Target: * Focus on the young adults segment (18-34 years) with a household purchasing size of 1-2 persons * Focus on the teens segment (12-24 years) with 3-4 persons 2. Segment: * Development of the diet segment * Focus on the regular 3. Advertising: * Theme campaign: o Sugar free o Natural flavour o Contemporary youth culture * Media campaign: o National campaign o Local campaign We will define a new positioning for orange Crush that is to say we will first focus on the young adults segment in order to prevent Sunkist's cannibalization and to establish Cadbury's presence on the two age categories segment. Secondly, we will develop the diet segment (50%) because it has a great potential unexploited with a higher gross profit margin than the regular segment and a high growth; besides, as Sunkist is present on the regular segment, this tactic could enable again the brand to evolve on both diet and regular segments. Thus, as we decided to develop the diet segment, we will insist, through our advertising campaign, on the sugar free and natural flavour, and keep Sunkist focusing on the youth culture campaign. Finally, concerning the type of media that we will use, we will operate on both national and local market thanks to a higher variety of ways. * Regular, Diet & Caffeine-free 2 ...read more.