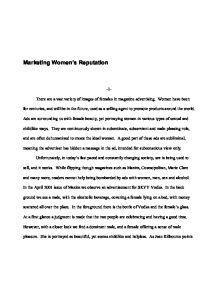 Marketing Women's Reputation -1- There are a vast variety of images of females in magazine advertising. Women have been for centuries, and will be in the future, used as a selling agent to promote products around the world. Ads are surrounding us with female beauty, yet portraying women in various types of s****l and childlike ways. They are continuously shown in subordinate, subservient and male-pleasing role, and are often dehumanized to create the ideal woman. A good part of these ads are subliminal, meaning the advertiser has hidden a message in the ad, intended for subconscious view only. Unfortunately, in today's fast paced and constantly changing society, s*x is being used to sell, and it works. While flipping though magazines such as Maxim, Cosmopolitan, Marie Clare and many more, readers cannot help being bombarded by ads with women, men, s*x and alcohol. In the April 2001 issue of Maxim we observe an advertisement for SKYY Vodka. In the back ground we see a male, with the alcoholic beverage, covering a female lying on a bed, with money scattered all over the place. ...read more.

The advertisers are influencing women to make their role as a caterer to men's needs and desires, which, therefore, are making women seem like objects for consumption. Women are often presented in a dehumanized way in media images. Consumers are surrounded by an ideal of female beauty, which is impossible to achieve because it is artificial. The models are artificially created in studios, through lighting and computer. Furthermore, the models themselves have a body type (tall, long legged, narrow hipped) that is characteristic of only about 5% of the female population. This idealized image of female perfection means women must transform themselves; to be who they are naturally is not okay. As Stanley Skinner points out in The Advertisement Book, "the function of many advertisements is to get the consumer to change....to make them feel dissatisfied with what they are. ...by showing us ideal people [such] as models....the advertiser is setting standards for society" (21). As in the SKYY Vodka ad the woman is being portrayed as flawless, and playful in a girlish way. ...read more.

By having hidden meanings and setting this reputation for women, advertisers are accomplishing their objective, specifically, to sell their products. Yet, they deny the fact that they are setting outrageous reputations for women in the 21st century (Rogers and Seiler). The images being portrayed in advertisements and commercials are forms of persuasive communication, yet is there not some way to take this disgraceful representation of women out of the picture? Obviously this type of advertising is intended for adults, however, it has not been taken into consideration that people, women in particular, strive to be like the models presenting the products, and in failing to do so, lose their dignity and self-esteem. The advertisers have merely thought of the fact that women who want to be like the models will buy their products, which seems to be quite unfair and misleading to the consumers. Even though it is estimated that one in 11 advertisements includes a direct message about standards of beauty, action is slowly being progressed towards ending the misjudging of women through advertising. ...read more.