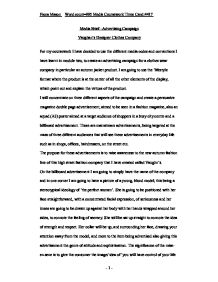 Media Brief -Advertising Campaign Vaughan's Designer Clothes Company For my coursework I have decided to use the different media codes and conventions I have learnt in module two, to create an advertising campaign for a clothes wear company in particular an autumn jacket product. I am going to use the 'lifestyle format where the product is at the center of all the other elements of the display, which point out and explain the virtues of the product. I will concentrate on three different aspects of the campaign and create a persuasive magazine double page advertisement, aimed to be seen in a fashion magazine, also an aquad (A3) poster aimed at a target audience of shoppers in a busy city centre and a billboard advertisement. These are mainstream advertisements, being targeted at the mass of three different audiences that will see these advertisements in everyday life such as in shops, offices, hairdressers, on the street etc. ...read more.

Also I am going to add the slogan I have created, 'Wear it, be it' again anchoring the message of 'the clothes make the person'. This will help people relate to the image, as they will understand what the model is representing. When I have taken the photos for these different advertisements I am going to decide on the context I want to connote by the variety of backgrounds I could choose from. I may either have a plain black background, which highlights the product, and name and exaggerates the film noir feel to my advertisement. Alternatively I may have everyday settings such as; a town centre or wine bar; places that represent working class lifestyle and places the consumer can relate to, when picturing themselves wearing this type of clothing. I am going to use photo shop to create my finished advertisement images as it offers me a wide range of functions and opportunities to further improve the design and finished look of my advertisement. ?? ?? ?? ?? Fiona Mason Word count=995 Media Coursework Three Cand:4417 - 1 - ...read more.