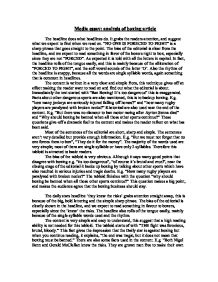 Media essay: analysis of boxing article The headline does what headlines do. It grabs the readers attention, and suggest what we expect to find when we read on. "NO ONE IS FORECED TO FIGHT" is a sharp phrase that goes straight to the point. The bias of the editorial is clear from the headline, and we expect to read something in favor of the boxers right to box, especially since they are not "FORCED". As expected it is told with all the letters in capital. In fact, the headline rolls of the tongue easily, and this is mainly because of the alliteration of "FORCED TO FIGHT", and the soft vowel sounds of the letter 'O'. Also the rhythm of the headline is snappy, because all the words are single syllable words, again something that is common in headlines. The content is written in a very clear and simple from, this technique gives off an effect making the reader want to read on and find out what the editorial is about. ...read more.

The daily stars headline 'they knew the risks' grabs attention straight away, this is because of the big, bold lettering and the simple sharp phrase. The bias of the editorial is clearly shown in the headline, and we expect to read something in favour to boxers, especially since the 'knew' the risks. The headline also rolls of the tongue easily, mainly because of the single syllable words used and the rhythm. The content is very simple and easy to understand, this suggest that a high reading ability is not needed for this tabloid. The tabloid starts of with "THE fight was ferocious, brutal, b****y." This fact gives the impression that the Daily star is against boxing but when you continue reading, it explains, "the end was tragic, but it does not mean that boxing must be banned." There are also some facts used in the content. E.g. "Both Nigel Benn and Gerald McClellan knew the risks. They are grown men free to make their own decisions." ...read more.

The sentences are generally short; there is only 1 long sentence in each paragraph. The sentences are very precise; the short sentences contain enough information so it's quick and easy for the businessmen to read. Bloated rich businessmen are an example of exaggeration used in the editorial, this phrase is talking about those rich men who are greedy and only care for them self. Raged is a powerful word used in the text, it gives of sense anger, and makes the content more dramatic. Most of the words used aren't very complicated which prevents the off-putting feeling. Even after reading the whole editorial it is still very difficult to tell which side of the debate it biased towards. It shows many point for and against boxing. 'Boxing is a multi-million pound business', 'sports promoters make millions', ' chance of achieving a better life', 'boxers are little more than dogs', 'beat each other to a pulp'. In conclusion of reading this article, I believe that although something should be done about the deaths that boxing brings, the decision to box then die or to live is the boxers. ...read more.