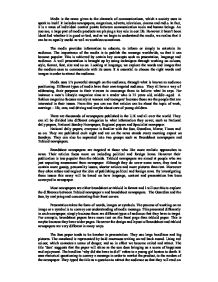 Media is the name given to the channels of communications, which a society uses to speak to itself.

Media is the name given to the channels of communications, which a society uses to speak to itself. It includes newspapers, magazines, adverts, television, cinema and radio. In fact, it is a mass of individual contact points between communication tools and human beings. As you see, a large part of media products are playing a key role in our life. However it hasn't been identified whether it is good or bad, and as we begin to understand the media, we realise that it can be as equally useful as well as worthless sometimes. The media provides information to educate, to inform or simply to entertain its audience. The importance of the media is to publish the message worldwide, so that it can become popular. This is achieved by certain key concepts such as presentation, language and audience. A well presentation is brought up by using techniques through working on colours, style, format, font, size and so on. Looking at language, we explore the words and images that the medium uses to communicate with its users. It is essential to choose the right words and images in order to attract the audience. Media uses it's powerful strength on the audience, through what is known as audience positioning. Different types of media have their own-targeted audience. They all have a way of addressing, their purposes to their viewers to encourage them to believe what its says. ...read more.

There is just one column of text in the Sun article and a large photograph of the young girl dominates the article. The girl has a little smile on her which conjures the image of the sun shining, then when u realise that this pure little sun shine has lost her life, it brings up a sympathetic value in readers mind. At this point the reader becomes emotionally involved arousing their interest. Further more the photographs have been used partly because they are visually interesting rather than because they are newsworthy. As we see, the front cover of the Sun paper has been designed to people who want to scan the news quickly, in order to have a good idea about the events happening around them without giving up great amount of time to read lengthily articles. The presentation of the article in the Guardian is less effective than the article in the Sun at attracting the readers' attention. They give very little importance to eye catching the audience, but they are more standard and are strict on providing the news rather that some sort of gossip. It is controversial. The masthead is in bold black writing on white back round. The black and white colour is there to give a formal and serious look. The name Guardian suggests to look after the needs of its audience. The headline: 'You can hide, general, but you can't run' is longer, therefore the powerful message is no as quick. ...read more.

A large part of a newspaper's identity is the language that it uses in its stories. The type of words used in the articles play an important role in the way it addresses its audience. The Sun paper uses very casual and shortened words, which help create a chatty, friendly tone. Also the language is very informal, as how people use language through a conversation; moreover they tend to use onomatopoeia, for example, "cruel" instead of badness, and "punch and slapped" instead of hurt, as an advantage to alert readers as the text becomes alive creating musicality in a sense. They refer to characters by nicknames, like "her mothers evil lover", "her mother" and "a neighbour". They often fail to extant the language in grammar or standard. Since they want to hold the attention of the readers without using long sentences or either difficult vocabulary, for the reason that, it has to be understand by lower educated people as well as to the intelligent people. The language used in Guardian tends to be formal. They contain more long and complex sentences. Headlines are in straight forward, in that they rarely use emotive or humour words. Use of difficult vocabulary is to put together the paper more standard. People in the stories have been given their proper titles such as "Gen Pinochet", "Mr Straw" and "Mr Artaza". The Guardian has aimed towards a more intellectual people. This is mainly because of the language, the language and word structure is much more good. In addition, the simple layout and the story with more facts and information for the content make the paper brighter. ...read more.