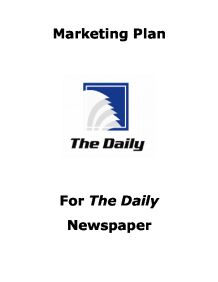 Marketing Plan For The Daily Newspaper 1. Executive Summary The Daily is a new 30p tabloid newspaper to be launched in 2007 and published daily throughout Britain. Its aim is to become one of Britain's most popular daily national newspapers after the likes of The Sun and will arguably be right-wing. In the near future it is predicted that it will also publish a sister paper, The Saturday, along with an Irish version if this proves successful. The Daily will be targeted at what is now considered the middle-market and intends to sell many hundreds of copies each day in 2007-2008 through effective marketing, with the objective switching to achieving sales in the regions of thousands in 2009-2010. The Daily is originally set to be a tabloid, although a broadsheet format will be considered in subsequent years even though it is unlikely that it will change. Its chief rivals are predicted to be the Daily Express and The Sun, amongst others, and will have a similar political stance and target audience. The Daily aims to have one of the highest circulations of any English language daily newspaper by 2010 and will try to occupy a position midway between the tabloid and broadsheet divide, covering much of the same celebrity ground as the tabloids but attempting to position itself as a more upmarket 'middle class' publication. It clearly has the market for the daily tabloid newspapers as evidenced by the general demographics and the popularity of those already published, distributed and circulated in Britain. This market is developing at a rapid speed and The Daily will add to the mix of newspapers and market this specific segment, particularly with the expected business model with regards to the marketing mix. The newspaper endeavours to grow steadily and profitably, providing outstanding coverage of news, sport and weather in addition to those previously ignored. The marketing plan will show the research conducted using publicly accessible secondary data provided by the newspaper industry and competitors, as well as research complemented by access to primary information. ...read more.

Below is a summary of the two adverts and promotions which will be created and produced for The Daily. 5.1 Advert 1: Poster The Daily will be advertised through a poster. It is a large piece of printed paper which hangs from a wall or other such surface. The poster will include both textual and graphical elements, designed to be both eye-catching and convey information about the new newspaper. The poster will be a frequent tool of advertising for the newspaper as they are easily accessible and relatively low-cost to produce and distribute. The conventional size for the graphical poster will be approximately 24x36 inches, although it may be a different size. In addition, a much smaller printed advert will be produced known as flyers. It is important to produce a draft, storyboard or script so that a visual idea of the advert is made available for assessment, criticism, redesign or improvement. 5.2 Advert 2: Billboard The second advert will be a billboard. This is a large outdoor advertising structure found in high traffic areas such as motorways and streets. The Daily will be advertised to passing pedestrians and drivers typically showing large, witty slogans and distinctive visuals. This form of advert was chosen for the newspaper as they are very effective forms of targeting a customer, and will also be located in commercial and industrial areas. Adverts will be placed on traditional, mechanical, digital and mobile billboards to reach a large percentage of the market population on a daily basis. The billboard will be designed to catch a person's eye and create a memorable impression quickly with only a few words, in large print and containing images in brilliant colour. 5.3 Promotion 1: Competitions Competitions will be used as the first form of promotion. However, for the sake of this marketing plan, only one will be produced. The competition will be to win a free holiday abroad for six people. ...read more.

11.2 Implementation and Control The Daily' management and staff may be less willing to implement the plan if they have not been actively involved in its creation. Therefore, effective communication of this plan is a key implementation requirement. Implementation of the marketing plan also requires resource acquisition, resource organisation and resource utilisation. 11.3 Implementation of the Marketing Plan The following steps are recommended to implement the key points of the marketing plan for The Daily newspaper: 1. Communicate and seek confirmation of the realistic substance of the plan with key people within the newspaper 2. Obtain the necessary marketing promotions budget to allow the market research programme and specific advertising campaigns to be undertaken 3. Restructure the existing marketing unit by function, to combine and establish a sales force 4. Get agreement from key people on projected sales objectives for the newspaper as well as consumption and readership goals 5. Set progressive monthly sales objectives for sales and marketing staff to reach the overall goal required by the end of 2008 6. Schedule monthly evaluation reviews of the marketing strategies and actions with key people 11.4 Control of the Marketing Plan The overall responsibility for the control and implementation of this marketing plan lies jointly with The Daily decision makers. An additional function responsibility lies with the Marketing Manager. Specific monthly control procedures to continually compare ongoing plans with actual results are recommended to determine whether the plan is working or not and what, if any, corrective action needs to be taken and include the following: * Monthly analysis of sales to determine the source of actual sales * Monthly analysis of sales performance to identify causes of above and below forecasted performance * Monthly analysis of profitability of the newspaper, market segments, sales staff and marketing channels * Monthly report to key decision makers outlining analysis conducted that includes recommendations for further actions to build on emerging strengths, as well as recommendations to overcome potential problem areas with the newspaper, individual staff, market segments and marketing channels. 11. ...read more.