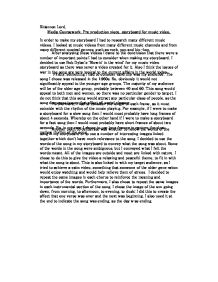 This is also linked in with my target audience, as I tried to achieve a calm video, something that someone of the older generation would enjoy watching and would help relieve them of stress. I decided to repeat the same images in each chorus to reinforce the meaning and importance of the words. Furthermore, I also chose to repeat the same images in each instrumental section of the song. I chose the image of the sun going down, from morning, to afternoon, to evening, to dusk; I did this to create the affect that one verse was over and the next was beginning. I also used it at the end to indicate the song was ending, as the day was ending. ...read more.