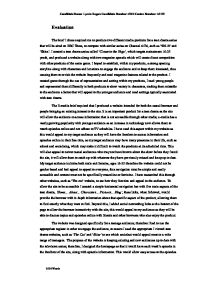 Evaluation The brief I chose required me to produce two different media products for a teen drama series that will be aired on BBC Three, to compete with similar series on Channel 4/E4, such as '90210' and 'Skins'. I created a teen drama series called 'Closer to the Edge', which targets mainstream 16-25 youth, and produced a website along with two magazine spreads which will create direct competition with other products of the same genre. I hoped to establish, within my products, a strong opening storyline along with characters and locations to engage the audience and to keep them interested, thus causing them to revisit the website frequently and read magazine features related to the product. I created genre through the use of representation and setting within my products, I used young people and represented them differently in both products to show variety in characters, making them relatable to the audience a factor that will appeal to the younger audience and used settings typically associated with teen drama. The E-media brief required that I produced a website intended for both the casual browser and people bringing an existing interest to the site. It is an important product for a teen drama as the site will allow the audience to access information that is not accessible through other ...read more.

Therefore all information on the site will be as up to date as possible and relevant to the show, the design of the website allows these changes to occur as it is a simple layout that can be easily changed, as the information and images will change, the layout and structure will not. I had produced mock-ups of the website design; this helped greatly while creating the website as it allowed the site to have a strong structure and layout, though my design of the website differed slightly to the mock-ups. I have created a working example of the site with the main links functioning to give examples of how my fully functional site may work, although I had little experience working with Dreamweaver I was able to create a partially functioning website demonstrating how the website will work. The Print brief required that I produced two magazine features on my product, each for two magazines that varied in style, because of this I chose to produce features for More! Magazine, a women's lifestyle magazine, and Kerrang! Magazine, a rock music magazine, as both their genre and style is significantly different. To ensure I replicate the styles of these magazines, I analysed issues of both magazines looking at the house styles, colours and typical conventions of the genre. ...read more.

Whereas, the copy in the magazine represents the band as rebellious through the use of foul language, common within Kerrang!. Within the feature I had to use a different socialect, from that of the website and more! Magazine feature, to ensure the regular readers of Kerrang! were not alienated and the feature would still appeal my target audience and also readers of Kerrang!. Similarly to the More! Magazine feature, I placed a interesting quote, which was enlarged within the center of the article, to engage the reader and encourage them to read the article. If chosen, the third brief required me to produce a trailer to promote 'closer to the edge', for this I would have created a trailer of approximately one minute in length, which would establish character through the representation of the six actors, mimicking stereotypes to create these representations and establishing the genre of teen drama. Also I would have used settings such as schools, homes and recreational locations to reinforce the teen drama genre. Furthermore, the trailer would establish storylines, such as alcohol, drugs and relationships typical to teen drama, that would be used in 'closer to the edge', attracting the audience as they would want to know the conclusions of the storylines. ?? ?? ?? ?? Candidate Name: Lynzie Rogers Candidate Number: 6200 Centre Number: 16139 1614Words ...read more.