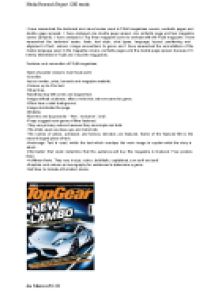 ﻿Media Research Report 1200 words. I have researched the technical and visual codes used in FILM magazines covers, contents pages and double page spreads. I have analysed one double page spread, one contents page and two magazine covers (Empire). I have analysed a Top Gear magazine cover to contrast with the FILM magazine. I have researched the technical codes, fonts, text style, shot types, language, layout, positioning and alignment of text, colours, image conventions to genre and I have researched the connotations of the media language used in the magazine covers, contents pages and the double page spread, because I?m keenly interested in FILM and I read the magazines. Features and convention of FILM magazines; ?Main character viewer?s main focal point. ?One film. ?Issue number, price, barcode and magazine website. ?Colours up to 4 for text. ?Strap lines. ?Masthead top-left corner and largest text. ?Image reflects audience, often a mid-shot, mis-en-scene for genre. ?Often have a dark background. ?Image dominates the page. ?Website. ?Banners and buzz words - ?free?, ?exclusive?, 'only'. ?Props suggest main genre of films featured. ?They use primary colours because they are simple and bold. ...read more.

You can see the side and the front, therefore looking at all of its main features as it is coming towards you. 1. For the common man to dream about having. 1. Subheadings stand out because they?re bold clean cut and bright, and match the main colour of the magazine. 1. ?Deranged 560 BHP?, a monstrous effect rather than the classy one. 1. ?Hyperspace?, Lambo?s immense speed entices audiences. 1. The edges on the car are emphasised because of the lighting, makes you see how dynamic and technological advanced and sleek it is. It?s time consuming and a lot of effort has gone into it. 1. Clarkson is very well known. Secondary promotion. 1. BBC, is at the top left and the first thing you see. It is advertisement of the huge company, and this is also advertising the TOP GEAR show. Brand that you trust. 1. The language-?bhp?, ?v12?, ?Gallardo?, is associated with car enthusiasts; this will entice and relate to them. 1. Language like ?thrust mode?, on a lads mag is an innuendo. This also helps to target the audience with informal mode of address, as it is friendly and manly language. ...read more.

These features all apply to drawing in the target audience of film magazines, from ages 17-30, who are interested in FILM and enjoy it, as they use iconography for FILM magazines which appeals to people of that age range. I will use these key findings that I collected when analysing to create my own pieces of magazines, that follow the conventions and the norms of the pieces I have analysed, but make some variations to broaden my audience, that show the generic conventions used in the covers and the inside material. I will use all of the features and conventions above to help appeal to the target audience of FILM magazines, which on average is males, aged 25 according to the media pack for Empire. I will use an informal but direct mode of address to help draw them in, using appropriately coloured text, including an often top margin, large masthead. A range of san serif and serif fonts to appeal to professional FILM enthusiasts and average people will be used. Appropriate images on the cover with a convention of mid shots to appeal to the target audience of 25 year old males using the images consisting of stars will be used. Joe Moorcroft 12G ...read more.