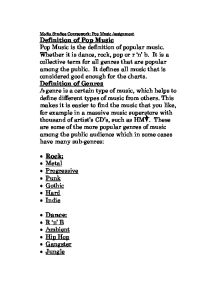 Media Studies Coursework: Pop Music Assignment Definition of Pop Music Pop Music is the definition of popular music. Whether it is dance, rock, pop or r 'n' b. It is a collective term for all genres that are popular among the public. It defines all music that is considered good enough for the charts. Definition of Genres A genre is a certain type of music, which helps to define different types of music from others. This makes it is easier to find the music that you like, for example in a massive music superstore with thousand of artist's CD's, such as HMV. These are some of the more popular genres of music among the public audience which in some cases have many sub-genres: * Rock: * Metal * Progressive * Punk * Gothic * Hard * Indie * Dance: * R 'n' B * Ambient * Hip Hop * Gangster * Jungle * Hard Step * Drum and Bass * Ragga * Garage * Deep, Hard, Progressive....House * Techno * Trance * Rap: * Hip ...read more.

Therefore genres are important to music retailers, the music press, television broadcasters and music product consumers. Cast Study : Madonna We, as a class looked at MADONNA'S image and how the WORLD MEDIA portrays her. To find this information we took a look at some of Madonna's music videos and how she portrays herself and acts in them. An aspect of the media Madonna is very good at is adapting her image with the times, so she remains popular and favoured by the public. She does this by adapting her style of dress and style of music for the style of the time. This has been effective throughout the whole of her career. It has helped her maintain her continual success over the years and has helped her maintain her current audience. There are certain parts of her style that she has kept over the years, which are unique to her. In all of her music videos she always has an aspect of religion, as she herself has been very religious all of her life. ...read more.

The audio representation of Madonna in the 'Bad Girl' video is of a grown up image because the song is a ballad; also the song has a dance rhythm, as with all of Madonna's songs. This is to fit into the dance genre. In Madonna's 1998 video 'Frozen' there is still the dance beat and again, like in the 'Bad Girl' video, the mood is very serious although there are touches of ethnic religion, such as markings on her hands and the song also has a kind of ethnic feel to it. Also the sexuality is still in the video, with Madonna's movements and clothing in the video. In the video for 'Ray of Light' which, as with 'Frozen,' was also done in 1998, there is still the dance beat, but it is much faster than the beat in the 'Frozen.' Also it is a much happier song than 'Frozen' which again shows how Madonna changed her style of music, even within a year, to keep up with the times. 'Less Than Jake: Borders and Boundaries' album cover Denotation Connotation ...read more.