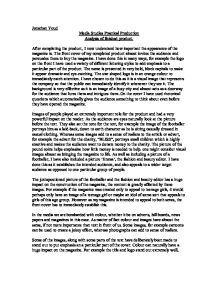 Jonathan Youd Media Studies Practical Production Analysis of finished product. After completing the product, I now understand how important the appearance of the magazine is. The front cover of my completed product almost invites the audience and persuades them to buy the magazine. I have done this in many ways, for example the logo on the front I have used a variety of different lettering styles to add emphasis to a particular part of the product. The name is presented in very bold, block capitals to make it appear dramatic and eye-catching. The star shaped logo is in an orange colour to immediately catch attention. I have chosen to do this as it is a visual image that represents the company so that the public can immediately identify it whenever they see it. The background is very effective as it is an image of a busy city and almost acts as a doorway for the audience that lures them and intrigues them .On the cover I have used rhetorical questions which automatically gives the audience something to think about even before they have opened the magazine. Images of people played an extremely important role for the product and had a very powerful impact on the reader. As the audience are eyes naturally look at the picture before the text. They also set the tone for the text, for example the image of the footballer portrays him as a laid-back, down to earth character as he is sitting casually dressed in casual clothing. ...read more.

This naturally establishes the magazine as place for intellectual conversing and communication as well as place for entertainment and what I would consider 'light hearted aspects'. The tone I use in the articles in this magazine vary, for example the main idea behind the "Kids and Drugs" article is shock young people to avoid getting themselves involved in drugs and the tone I have used naturally shocks the reader. At the end of the article, I have used a shocking statistic that leaves the reader with something to think about. The article entitled "Gee mom television has made me American" is a complete change in tone and actually uses humour. I have chosen to produce this magazine in a way that includes contrasts between serious and funny. I have chosen this as it directly reflects a teenager's life and in so doing making it appeal to the target audience. In conclusion the front cover had to naturally reflect the contrast between the themes and content in this magazine. The way in which I have used language has had a huge impact on the product. For example I have used colloquial language to help the intended audience relate to the product as a whole and the articles within it. For instance, the article about young children and drugs has been written in both formal as well as informal language. The Headline refers to children as "Kids"; this naturally makes the audience relate to the article more. ...read more.

I have al so included on this poster comments and quotes from critics like Jonathan Ross, for example, as these comments naturally persuade the audience to see the film. Other people's views and opinions are used al lot on film posters as they, not only persuade the audience to see the it, but al so help to suggest the content themes behind the particular film. I have included a number of appeals in my images. For example, in the charity campaign I have included pictures of some children in desperate need of money and support. The images themselves have allot of appeal in them as they encourage the audience to donate money to the charity. Whereas some of the images have people posing in certain positions that directly reflect the purpose of the advert. For example the "cool" clothing advert has three picture of models, all appearing strong and healthy. These images are important as the attractive models encourage the audience to buy the product. In the media attractive models are used all the time to sell the company's product. The fact that I have used both male and female models, the product immediately appeals to a wider target audience. The advertisements are a great source of revenue for the magazine company and the advertisements must be concentrated on in particular. Radio uses verbal advertisements and the audience have to picture the particular product in their minds. However, magazines are somewhat different and the images must be of extreme importance. The statement ; " A picture can paint a thousand words" is very true to the media. ____________________________________________________ ...read more.