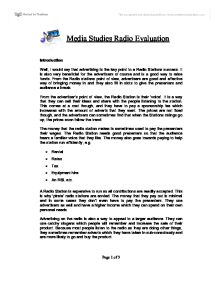 Media Studies Radio Evaluation Introduction Well, I would say that advertising is the key point to a Radio Stations success. It is also very beneficial for the advertisers of course and is a good way to raise funds. From the Radio stations point of view, advertisers are good and effective way of bringing money in and they also fill in slots to give the presenters and audience a break. From the advertiser's point of view, the Radio Station is their 'voice'. It is a way that they can sell their ideas and share with the people listening to the station. This comes at a cost though, and they have to pay a sponsorship fee which increases with the amount of adverts that they want. The prices are not fixed though, and the advertisers can sometimes find that when the Stations ratings go up, the prices soon follow the trend. The money that the radio station makes is sometimes used to pay the presenters their wages. The Radio Station needs good presenters so that the audience hears a familiar voice that they like. The money also goes towards paying to help the station run efficiently, e.g. * Rental * Rates * Tax * Equipment hire * An RSL etc. ...read more.

We wanted to make a recording which would be aimed at teenagers (between the age of 13-19) so we chose topics that we thought would be relevant. The first advert that we did was for Brooks Clinic which handles safe s*x and teenage pregnancy. The advert was there to emphasise the need to protect yourself when having s****l intercourse. The way the advert was structured would make it affective for teenagers because it was said in a way which was casual and there was a voice which speaks out to listeners. The second advert was for a local butchers located near to the school. This was chosen because it was a local company which meant that it would want to be advertised on the local radio station. This advert was carefully planned because we knew how we wanted the advert to sound. We wanted the advert to have a market sound (people talking in the background) and it was spoken in a common way. This is stereotypical to have a person with a common accent working in a market but it was the affect that we were going for. ...read more.

I felt that a lot of hard work went into producing a quality production and the team work was very good. Everyone had a role which was decided at the start of the project which meant that any problems faced ran smoothly. The only problems we did face during our work were small matters like 'what music should be used for each advert'. There were differences in opinion and this wasted some time. Another problem was that after we had started recording, people felt that they wanted to change roles or they didn't want to do certain things. This meant that some people were inconvenienced and had to do extra work. I am glad that these problems came up although they did waste some time. I think that after we had problems, we changed our plans and in the end it worked out for the better. If I could change anything, I would change the topic that the radio show was based on. I think that by making the show just for girls, a lot of potential listeners would be put off. I think that a radio show which is targeted at boys and girls would be much more successful and we would have had more of a variety of things to talk about. By Kyle Newsam Page 1 of 3 ...read more.