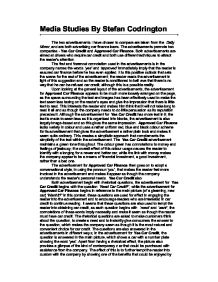 The effect of this is to further tempt the reader into custom with the company by showing one of the benefits that could be enjoyed by the reader if he decides to trade with the company. The rhetorical question used in the Approved Car Finance advert is used for a similar effect, the question ('Want it?') is asked in reference to the picture of a car and is answered below the picture with the imperative phrase 'Have it'. This use of an imperative phrase instructs the reader with a command that gives the impression that it is definitely possible for the reader to obtain credit from the company and to purchase a car like the one shown in the main image. The imperatives in these phrases are emphasised and strengthened by the fact that they are used in short sentences. The Yes Car Credit uses a group of three criteria that must be met in order to be accepted for car credit. This makes the criteria seem easy to meet although there may be many more, it also broadens the scope reader who may be eligible for car credit. ...read more.

Vibrant colours such as reds, yellows and blues would stress the relaxed tone that the text sets. I also believe that the advertisement could have used more persuasive language, for example using repetition - "If you've got a poor credit history, you've been approved; if you've got no credit history at all, you've been approved; whatever your financial problems are, you've been approved". This use of repetition would not only emphasise how easy it is to obtain car credit from the company, but would also be repeating the company's name, embedding it in the reader's memory. Overall, I think that the advert for Yes Car Credit is more persuasive and I would be more inclined to take credit from them as their advertisement focuses much more on the simplicity of service from the company and seems more appealing to an average person. Its range and use of colour keep the reader interested in the content. The Approved Car Finance advert is not as appealing as its lack of colour and images fail to hold the reader's interest and the advert relies too heavily on text. While the text does have some good examples of linguistic devices, I do not think they are used to their greatest effect, as is demonstrated in much better fashion by the Yes Car Credit advertisement. ...read more.