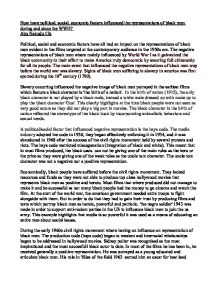 The media industry adopted the code in 1930, they began effectively enforcing it in 1934, and it was abandoned in 1968 after the success of the civil rights movement held by several protests and riots. The hays code restricted miscegenation (integration of black and white). This meant that in most films produced, the black casts can not be giving one of the main roles as the hero or the prize so they were giving one of the weak roles as the uncle tom character. The uncle tom character was not a negative nor a positive representation. Economically, black people have suffered before the civil rights movement. ...read more.

During the early 1960s civil rights movement where having an influence on representation of black men. The production code (hays code) began to weaken and interracial relationships began to be addressed in hollywood movies. Sidney poiter was recognised as the most inspirational and the most succesfull black actor to date. In most of the films he has been in, he received generally a positive representation. He was potrayed as a young educated and articulate black man. His role in 'lilies of the field 1963 earned him an oscar for best lead performance. He became the first black man to win an oscar. Most of the characters he played were marked different from past stereotypes, making it a success and a march of progress towards the black community in the United states. ...read more.