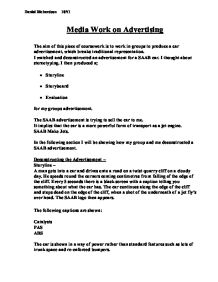 Media Work on Advertising - produce a car advertisement, which breaks with traditional representations

Media Work on Advertising The aim of this piece of coursework is to work in groups to produce a car advertisement, which breaks traditional representation. I watched and deconstructed an advertisement for a SAAB car. I thought about stereotyping. I then produced a; * Storyline * Storyboard * Evaluation for my groups advertisement. The SAAB advertisement is trying to sell the car to me. It implies that the car is a more powerful form of transport as a jet engine. SAAB Make Jets. In the following section I will be showing how my group and me deconstructed a SAAB advertisement. Deconstructing the Advertisement - Storyline - A man gets into a car and drives onto a road on a twist quarry cliff on a cloudy day. He speeds round the corners coming centimetres from falling of the edge of the cliff. ...read more.

Traditionally Men are supposed to have big, loud and sporty looking cars with a big engine. Traditionally Woman are supposed to have a small, smooth running and enough space in the trunk to hold the weekly shopping. The car I will be advertising will be called the "Magnifico". I need a slogan for the car and because of the cars name I and the rest group have chosen: "If David Beckham was a car...(picture of Magnifico) Magnifico, a star in its own class." (Black screen with company logo) I am now going to write my storyline for the Magnifico advertisement. There is a soldier on an assault course wearing green camouflage combats and a beret. There are close up and fast moving shots showing different parts of the soldiers body whilst switching between that and shots of different parts of the car. ...read more.

I have prepared a list of slogans that could have been used for my advertisement: Magnificent. Unique in its own way. Top notch Mobile. Evaluation - To show that I understood gender stereotyping, I mixed the stereotyping round in my advertisement. By doing this, it shows that the car is not only sporty, but women can drive it as well as men. I chose to pick a low age for my target audience, as the car would be ideal for a first car and not much to run. Working in a group was no problem for me as the whole group came up with different ideas that worked well. As a whole, I think that this project was a success. We were placed in random groups, away from who we'd usually chose to work with. I think that this was a good idea because mostly, when placed with friends, you tend to talk a bit more and get less work done. Daniel Richardson 10N1 ...read more.