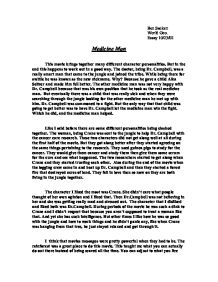 Ben Sackett World Geo. Essay 10/23/02 Medicine Man This movie brings together many different character personalities. But in the end this happens to work out in a good way. The doctor, being Dr. Campbell, was a really smart man that came to the jungle and joined the tribe. While being there for awhile he was known as the new nickname. Why? Because he gave a child Alka Seltzer and made him fell better. The other medicine man was not very happy with Dr. Campbell because that was his own position that he took as the real medicine man. But eventually there was a child that was really sick and when they were searching through the jungle looking for the other medicine man he met up with him. Dr. Campbell was summoned to a fight. But the only way that that child was going to get better was to have Dr. Campbell let the medicine man win the fight. Which he did, and the medicine man helped. ...read more.

The character I liked the most was Crane. She didn't care what people thought of her own opinion and I liked that. Then Dr.Campbell was not believing in her and she was getting really mad and stressed out. The character that I disliked and liked both was Dr.Campbell. During periods of the movie he was such a d**k to Crane and I didn't respect that because you aren't supposed to treat a woman like that. And yet she has such intelligence. But other times I like how he was so good with the jungle and how to work things and he didn't panic any, like when Crane was hanging from that tree, he just stayed relaxed and got through it. I think that movies messages were pretty powerful when they had to be. The rainforest was a great place to do this movie. This taught me what you can actually do out there instead of being scared all the time. ...read more.

They learned some English just for this movie so its pretty obvious that this is real. I actually liked this movie but there were some parts I rather being sleeping through but the a good percent of the movie really had me watching closely. Seeing what was going to happen next and how they were going to apologize to each other. The other part like when the beginning was not so interesting. The photography was pretty good. I would like to think that there was some computer tricks in the movie, atleast a hint of it. But the other parts of the film really impressed me. The conflict and dialogue were great. There is also the part of this where I would probably suggest this movie to someone else. Surprising enough how much I hate school movies but this one was actually good. I mean I wouldn't go out and rent it to watch this movie with my friends but I did like the movie overall. ...read more.