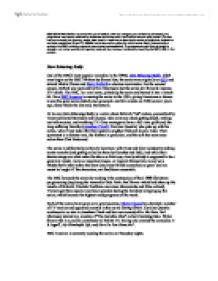 MEN BEHAVING BADLY spawned the cult of laddism. With its outrageous but endearing characters, the programme was warmly received by audiences and critics alike - and half its viewers were women. The title has now entered into common usage, often used in headlines to describe the antics of politicians, footballers and other celebrities. When ITV decided not to take up the option for a third series, Beryl Vertue took the series to the BBC; switching networks was almost unprecedented. The programme went from strength to strength, won many awards and regularly received rave reviews, handsomely rewarding the BBC's faith in the project... Men Behaving Badly One of the BBC's most popular comedies in the 1990s, Men Behaving Badly, didn't even begin on the BBC! Written by Simon Nye, the series was originally on ITV and starred Martin Clunes and Harry Enfield as clueless roommates. For the second season, Enfield was replaced by Neil Morrissey, but the series still failed to impress ITV chiefs. The BBC, in a rare move, picked up the series and turned it into a smash hit. Now BBC America is running the series in the USA, giving Americans a chance to see this great series (which also spawned a terrible remake on NBC several years ago, about which the less said, the better!). ...read more.

Not surprisingly, plenty of men loved MBB, identifying with the two male lead characters, while a good many women tended to like it because it proved what they had always known: that men can be sad berks, interested only in alcohol and sex (or, to quote MBB vernacular, boozing and shagging) - although, inevitably, the two male leads got plenty of the former and little of the latter. Martin Clunes, speaking before the first series aired, got it about right when he described MBB as 'the comedy of the locker-room, that rowdy male behaviour that we try to suppress in public'. Neil Morrissey, his subsequent co-star, has also summed it up by stating, 'Like most blokes we resolve all our problems by having a lager in front of the TV and not talking about anything'. Most of the episodes indeed ended in this non-reflective, inconsequential way, with the two guys sprawled on the couch, licking their wounds by guzzling from a can of lager, having advanced not a whit from the Neanderthal. Men Behaving Badly was based around the antics of Gary and Dermot (series one) or Tony (subsequently), who share a shambolic London flat. Gary owns the apartment but takes in a lodger to help him pay the bills. (He's not short of money but is thrifty. ...read more.

But when the real Kylie turned up at their flat the boys strangely failed to recognise her. Three months after the final episode, the team reunited for a short piece screened in Comic Relief 1999, appearing in as Swinging Sixties versions of themselves, cast in a 'recently rediscovered' black and white pilot for a 1960s sitcom titled The Naughty Boys. It was fab. Martin Clunes and Caroline Quentin also appeared together in the TV adaptation of the hit stage-play An Evening With Gary Lineker (first run in the theatre in December 1991), networked by ITV on 14 June 1994. Paul Merton (Quentin's then husband), Clive Owen, Lizzy McInnerny, co-authors Arthur Smith and Chris England, and former football star Lineker himself also appeared. All four stars of Men Behaving Badly squared off against each other (women versus men) in a charity edition of the game-show Bullseye presented as part of Children In Need (BBC1, 20 November 1998) and turned up again in a special edition of C4's food and chat show Late Lunch, screened as Late Lunch Behaving Badly on 23 December 1998. In danger of being perceived as a permanent double-act, Clunes and Morrissey starred in one-off musical comedy film Hunting Venus (Yorkshire for ITV, 31 March 1999) and teamed again for a three-part documentary on Australia, Men Down Under (BBC1, 31 August-14 September 2000). On 11 July 2002 BBC1 screened The Real...Men Behaving Badly, a spurious tie-in that combined clips with interviews with real-life laddish-lads, including Neil Morrissey. ...read more.