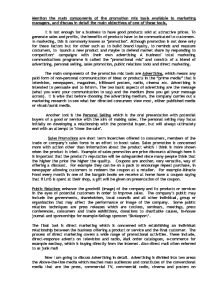 Mention the main components of the promotion mix tools available to marketing managers, and discuss in detail the main objectives of one of these tools

Mention the main components of the promotion mix tools available to marketing managers, and discuss in detail the main objectives of one of these tools. It is not enough for a business to have good products sold at attractive prices. To generate sales and profits, the benefits of products have to be communicated to customers. In marketing, this is commonly known as "promotion". Although promotion is not done only for these factors but for other such as to build brand loyalty, to reminds and reassure costumers, to launch a new product and maybe to defend market share by responding to competitors' campaigns with their own advertising A business' total marketing communications programme is called the "promotional mix" and consists of a blend of advertising, personal selling, sales promotion, public relations tools and direct marketing. The main components of the promotion mix tools are Advertising, which means any paid form of non-personal communication of ideas or products in the "prime media" that is television, newspapers, magazines, billboard posters, radio, cinema etc. Advertising is intended to persuade and to inform. The two basic aspects of advertising are the message (what you want your communication to say) ...read more.

The final tool is direct marketing which is concerned with establishing an individual relationship between the business offering a product or service and the final customer. The process of direct marketing covers a wide range of promotional activities. These include, direct-response adverts on television and radio, Mail order catalogues, e-commerce for example eastbay, which is buying directly from the internet. Also direct mail often referred to as junk mail Now I am going to discuss Advertising in detail. Advertising is divided into two areas the Above-the-line media which reaches mass audiences and constitutes of the conventional media that are the press, commercial TV, commercial radio, cinema and posters on billboards and transport. The other area is below -the-line media which does not use commercial media but instead advertise through methods over which the company has considerable control, such as exhibiting at trade fairs, direct mail, mail drops, point-of-sale, sky advertising and sales literature. In this type of media there is not an independently owned mass media and not every one may always have the opportunity to see or read the promoter's message. Advertising is able to reach a wide geographical area (blanket advertising) ...read more.

Surely it is not worthed and very expensive to promote a sale through personal selling and not very effective by public relations. By advertising you can see what your target market is influenced by most and apply the right medium. For example if a company wants to promote chairs and beds for the elderly surely it will not choose to advert in the cinema because they are more frequented by youths other then the elderly. It will choose either the television or radio. Also it is wise to printed adverts such as magazines the advert can be easily read and referred to for more than one time. Apart form reassuring the consumer advertising helps to remove any post-purchase anxieties of consumers especially when the product is expensive such as cars and appliances and helps maintaining a long term relationship with established consumers. The key to successful promotion is that who promote must believe in the product and must be credible and enthusiastic either when making the advert and even in personal selling. Then the marketing managers have the important task to choose the right tool and the most effective medium, which will lead to success or failure. Odette Caruana Intermediate 2nd Year ...read more.