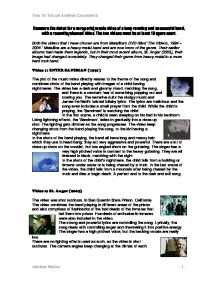 Compare the debut (or a very early) music video of a long-running and successful band, with a recently released video. The two videos must be at least 10 years apart. Both the videos that I have chosen are from Metallica's DVD titled 'The Videos, 1984 - 2004.' Metallica are a heavy metal band and are now icons of the genre. Their earlier albums had made them legends, but in their most recent album, St. Anger (2003), their image had changed completely. They changed their genre from heavy metal to a more hard rock band. Video 1: ENTER SANDMAN (1991) The plot of the music video directly relates to the theme of the song and combines shots of the band playing with images of a child having nightmares. The video has a dark and gloomy mood; matching the song, and there is a constant fear of something popping out and scaring you. ...read more.

In the shots of the child's nightmare, the child falls from a building or drowns under water or is being chased by a truck. In the last scene of the video, the child falls from a mountain after being chased by the truck and dies a tragic death. A perfect end to the dark and evil song. Video 2: St. Anger (2003) The video was shot outdoors, in San Quentin State Prison, California. The video combines the band playing in different areas of the prison and also comprises of flashbacks of the bad deeds of the inmates that led them into prison. Hundreds of enthusiastic inmates were also included in the video. The strong and powerful lyrics are controlling the song. Lyrically, the song deals with controlling anger and channeling it into positive energy. The singer has a high pitched voice, but the backing vocals are really low. ...read more.

No longer did the band wear all black clothes. The music was controlling Enter Sandman; however, the lyrics controlled St. Anger. There wasn't a guitar solo in St. Anger. The whole musical genre has changed from Heavy Metal to 'Punkish Rock.' One member of the band has also been changed, the bassist. The bass in St. Anger can't be heard at all, while, in Enter Sandman, the bass is probably the most important instrument. The lyrics have changed, as well as the way the song in sung. The anger can be seen in Enter Sandman, but the strong lyrics from St. Anger are not being sung with the same FURY. A sense of happiness can be seen from St. Anger, which was not seen in Enter Sandman. Enter Sandman was just a gloomy metal ballad with dark lyrics, and the change from that into a more happy Punk song is a dramatic change. ?? ?? ?? ?? Year 10 Textual Analysis Coursework Abhinav Mathur - 1 - ...read more.