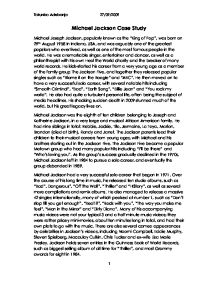 Michael Joseph Jackson, popularly known as the “King of Pop”, was born on 29th August 1958 in Indiana, USA, and was arguably one of the greatest popstars who ever lived, as well as one of the most famous people in the world. He was a remarkable singer, entertainer and dancer, as well as a philanthropist with his own Heal the World charity and the breaker of many world records. He kick-started his career from a very young age as a member of the family group The Jackson Five, and together they released popular singles such as “Blame it on the Boogie” and “ABC”. He then moved on to have a very successful solo career, with several notable hits including “Smooth Criminal”, “Bad”, “Earth Song”, “Billie Jean” and “You rock my world”. He also had quite a turbulent personal life, often being the subject of media headlines. His shocking sudden death in 2009 stunned much of the world, but his great legacy lives on.

Michael Jackson was the eighth of ten children belonging to Joseph and Katherine Jackson, in a very large and musical African American family. He had nine siblings in total: Rebbie, Jackie, Tito, Jermaine, La Toya, Marlon, Brandon (died at birth), Randy and Janet. The Jackson parents lead their children to their musical careers from young ages, with Michael and his brothers starting out in the Jackson Five. The Jackson Five became a popular Motown group who had many popular hits including “I’ll be there” and “Who’s loving you”. As the group’s success gradually declined in the 1970s, Michael Jackson left in 1984 to pursue a solo career, and eventually the group disbanded in 1989.

Michael Jackson had a very successful solo career that began in 1971. Over the course of his long time in music, he released ten studio albums, such as “Bad”, Dangerous”, “Off the Wall”, “Thriller” and “HIStory”, as well as several more compilations and remix albums. He also managed to release a massive 42 singles internationally, many of which peaked at number 1, such as “Don’t stop till you get enough”, “Beat it”, “Rock with you”, “The way you make me feel”, “Man in the Mirror” and “Dirty Diana”. Many of his accompanying music videos were not your typical 3 and a half minute music videos; they were rather pricey mini-movies, about ten minutes long in total, and had their own plots to go with the music. There are also several cameo appearances by celebrities in Jackson’s videos, including Naomi Campbell, Eddie Murphy, Steven Spielberg, Macaulay Culkin, Chris Tucker and ex-wife Lisa Marie Presley. Jackson holds seven entries in the Guinness Book of World Records, such as biggest selling album of all time for “Thriller”, and most Grammy awards for eight in 1984.

As well as being a great musician, Michael Jackson was also an excellently skilled dancer, had many well-known trade mark dance moves, like the moon walk, the anti-gravity lean, his tap dance, the crotch grab, spinning, popping, locking and gyrating. Several other well known musical artists take influence from his dances, like Beyoncé, Justin Timberlake, Usher and Britney Spears. There is also his influential trademark fashion, such as the glove, the ankle swinger trousers, the hat, the different jackets, and much more. Jackson is probably one of the most parodied celebrities of all time in different works of media, both mockingly and favourably.

Despite his undeniably triumphant musical career, Michael Jackson has also been the subject of many controversies and press speculations, as well as a very interesting personal life. He was cleared innocent in 2005 after being accused many times of inappropriate behaviour with children. He had developed the skin disease vitiligo, which lead to the whitening of his skin. He married twice, to Lisa Marie Presley in 1994, and then again to Debbie Rowe in 1996, and they had two children together, Paris and Prince. After divorcing Debbie Rowe, he also had a third child called Prince II (nicknamed Blanket), mothered by an anonymous surrogate. Michael Jackson had been described as having Peter Pan Syndrome, as he was like a child inside an adult’s body, and he was quite socially immature. He even had his own Neverland Ranch built, with a mansion and an amusement park.

In 2008, Michael Jackson celebrated his big 50th birthday, as well as a special edition release of his album “Thriller” to mark its 25th anniversary. He announced plans of several concerts called “This is it”, on 50 dates starting from 13th July 2009 to 6th March 2010, and sold a record breaking number of tickets. Unfortunately, these concerts never took place, as he died on the 25th June 2009 of a cardiac arrest, in his rented home in Los Angeles. When the news first broke, there was lots of media coverage and internet traffic heightened with people searching for confirmation. His televised memorial service was held on 7th July 2009 in Los Angeles, and he was buried 3rd September 2009.

I chose to write a case study on Michael Jackson because I have always liked his music since I was young, and there is so much about him that is interesting and intriguing. He is a big part of pop phenomena, and not only has his music entertained millions, he has also inspired many other musicians with their own music. He had his own unique original style with his music, fashion and dancing. He has always been one of the most talked about and referenced people in the world, over the past few decades. He may have passed on, but his legacy lives on.