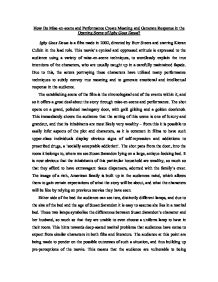 Mise-en-scene in 'Igby Goes Down'

How Do Mise-en-scene and Performance Create Meaning and Generate Response in the Opening Scene of Igby Goes Down? Igby Goes Down is a film made in 2002, directed by Burr Steers and starring Kieran Culkin in the lead role. This movie's cynical and oppressed attitude is expressed to the audience using a variety of mise-en-scene techniques, to wordlessly explain the true intentions of the characters, who are usually caught up in a carefully maintained fa�ade. Due to this, the actors portraying these characters have utilised many performance techniques to subtly convey true meaning and to generate emotional and intellectual response in the audience. The establishing scene of the film is the chronological end of the events within it, and so it offers a great deal about the story through mise-en-scene and performance. The shot opens on a grand, polished mahogany door, with gold gilding and a golden doorknob. This immediately shows the audience that the setting of this scene is one of luxury and grandeur, and that its inhabitants are most likely very wealthy - from this it is possible to easily infer aspects of the plot and characters, as it is common in films to have such upper-class individuals display obvious signs of self-repression and addictions to prescribed drugs, a 'socially acceptable addiction'. ...read more.

Neither looks particularly concerned, implying either they have no heartache over her dying, or they have already come to peace with it, which further implies that her death has been a long-time coming, or planned. The next shot is the first of Igby, the central character, in a mid-close-up shot. Igby looks up from the bed and at his mother in a manner that suggests he is incredibly bored and resentful of the situation and his mother. This single look instantly tells the audience a lot about their relationship, and that their turbulent affiliation with one another will act as a key theme for the movie. This supports the impression of a rich, dysfunctional family that the audience have gained so far. The first words of the film are uttered by Igby, in the same MCU shot; 'Why couldn't she have been a f*****g smoker?' This is a puzzling line, delivered in a dead-pan manner that will be associated with Igby throughout the film. The first words of the film seem to clash with the situation, as an audience would not suspect a son to wish smoking upon their dying mother. ...read more.

This is pointed out by Oliver in an aggravated tone that shows him to be a character who does not like to fail; something that we can assume from what we know is inherited from his mother. As she continues to not die, Igby and Oliver bicker regarding insignificant events that happened many years in the past, such as Oliver breaking Igby's toy train. This bickering is made to appear typical of anytime the two brothers are with one another, and continues to display how dysfunctional this family is, and how much Igby seems to resent Oliver for always being 'the favourite'. This all makes it obvious to the audience of Igby's place in the family, implied by language to be 'Dad's son', as opposed to his mothers son, a metaphorical way of showing the audience that Igby takes after his father, not his mother. This apparent family divide is made all the more strong by the unexplained absence of the father of Oliver and Igby. Overall, the opening five minutes are incredibly foretelling of the events to unfold in the movie, and give the audience a clear picture of what Igby, Oliver and their mother's character are like. This movie uses mise-en-scene and performance to cleverly and subtly explain the movie before it has even began. ...read more.