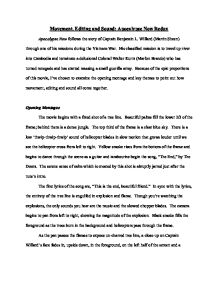 Movement, Editing and Sound: Apocalypse Now Redux Apocalypse Now follows the story of Captain Benjamin L. Willard (Martin Sheen) through one of his missions during the Vietnam War. His classified mission is to travel up river into Cambodia and terminate a delusional Colonel Walter Kurtz (Marlon Brando) who has turned renegade and has started massing a small guerilla army. Because of the epic proportions of this movie, I've chosen to examine the opening montage and key themes to point out how movement, editing and sound all come together. Opening Montague The movie begins with a fixed shot of a tree line. Beautiful palms fill the lower 2/3 of the frame; behind them is a dense jungle. The top third of the frame is a clear blue sky. There is a low 'thwip-thwip-thwip' sound of helicopter blades in slow motion that grows louder until we see the helicopter cross from left to right. ...read more.

This awkward shot is strangely calming. You wonder, "Why is he upside down? What's he looking at? Where is he?" The inferred answers are given to you simply by the spinning fan on the right. He's lying down, staring at the ceiling. As another chopper crosses from left to right, the fan fades out and the background changes to a closer shot of palm trees silhouetted by an orange glow of flame. The camera is now panning from right to left as parts of the trees break and fall to the ground in slow motion, all the while Willard's face is still seen at half opacity on the left side of the screen. The face of a Cambodian stone statue fades in on the right. Only half the face can be seen as it's partially transparent. This gives a foreboding sense of things to come. The background fades out and is replaced with the previous palm tree line. ...read more.

For example, a calm river with jungle on either side, during sunset, is disrupted by the military boat motoring from right to left upriver making waves, disturbing serenity; an orange horizon silhouetting palm trees or a mountain range with a squad of helicopters looming above; Helicopters flying low over crystal blue breaking waves right before reigning havoc on a port town. He sets military equipment on the stage and moves them against the natural flow, adding a subtext to the movie; "These things don't belong and shouldn't be here." Also, Coppola uses the calming narration of Captain Willard to quiet and re-center the audience. He's able to depict a scene of horrendous violence and bloodshed then the low, controlled voice of Willard narrates, most times explaining the situation just past and brings the audience back to the focus of the movie. The whole of the movie not only tells the story of Captain Willard's mission, but it also allows the audience to experience the horrors of war without driving them from the theatre. ...read more.