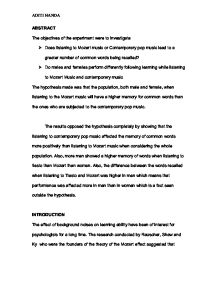 ABSTRACT The objectives of the experiment were to investigate > Does listening to Mozart music or Contemporary pop music lead to a greater number of common words being recalled? > Do males and females perform differently following learning while listening to Mozart Music and contemporary music The hypothesis made was that the population, both male and female, when listening to the Mozart music will have a higher memory for common words than the ones who are subjected to the contemporary pop music. The results opposed the hypothesis completely by showing that the listening to contemporary pop music affected the memory of common words more positively than listening to Mozart music when considering the whole population. Also, more men showed a higher memory of words when listening to tiesto than Mozart than women. Also, the difference between the words recalled when listening to Tiesto and Mozart was higher in men which means that performance was affected more in men than in women which is a fact seen outside the hypothesis. INTRODUCTION The effect of background noises on learning ability have been of interest for psychologists for a long time. The research conducted by Rauscher, Shaw and Ky who were the founders of the theory of the Mozart effect suggested that musical experiences of short duration can have a direct causal influence on spatial reasoning on both a short term and a long term basis (Rauscher, 1997). ...read more.

Apparatus & Material A single A4 response sheet was given to every participant. Each response sheet had a unique code to it to preserve anonymity. There was a section for them to write their age, s*x and their responses. The experiment was conducted using Microsoft Power Point. SPSS was used to analyse the data. Procedure Participants were informed that they had the right to not participate or withdraw at any stage they want. The participants were briefed according to the instructions given to them in Appendix 1. This explained the task to them. The 40 words in LIST A & LIST B were selected from MRC Psycholinguistics database (Colheart, 1981) and can be seen in Appendix 2. The words in both the lists were different and comprised of 5-6 letters. The presentation of the words in LIST A & B was the same. Each word was presented on the centre of a slide with a white background and the font of the word was 72 black Tahoma. It was presented in lower case with one word to each slide. While LIST A was presented music by DJ Tiesto was played in the background. The track was 'Forever Today' from the album 'Parade of the Athletes' which was released in 2004 by a Dutch company named Nettwerk. After all the 40 words were displayed the participants were asked to recall as many words as they possibly could and write them on the response sheets. ...read more.

The original hypothesis that males too would recall more words when listening to Mozart was opposed as well. The mean score in Tiesto condition was 10.67 (sd=3.42) and in Mozart condition was 9.07 (sd=4.19). This shows that overall the population recalled more words when listening to music by Tiesto. Thus the whole original hypothesis was not supported by the experiment conducted as more of the population of both genders recalled more words when listening to Tiesto. The standard deviation in the results when population was listening to music was Tiesto was lower than that when population was listening to music by Mozart which shows. This however means that the variations in number of words recalled was higher in Mozart. These results show that even though Rauscher's theory of music affecting spatial reasoning was correct, the memory depends on the kind of music or noise that is present in the background. Also the fact that the men had a larger difference between number of recalled words than women shows that there was a higher increase in performance when listening to music in men. Their could be various errors present in the experiment which include the fact the factors like the seriousness and the level of commitment each member of population has when conducting the experiment. Small factors like these are important as a very small population was considered which would mean that every person would affect the results hugely when considering the results as a percentage. This could be avoided by offering no initiative or adding compulsion to perform the experiment. ...read more.