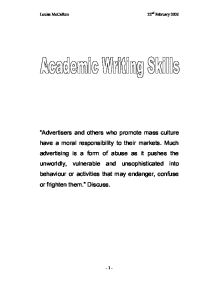 Much advertising is a form of abuse as it pushes the unworldly, vulnerable and unsophisticated into behaviour or activities that may endanger, confuse or frighten them.&quot; Discuss.

"Advertisers and others who promote mass culture have a moral responsibility to their markets. Much advertising is a form of abuse as it pushes the unworldly, vulnerable and unsophisticated into behaviour or activities that may endanger, confuse or frighten them." Discuss. Advertisers and others who promote mass culture have a legal responsibility to their audience to prevent miss-use and to stop the vulnerable getting influences and or confused. Do the legalities affect their moral responsibility? Rap artists discuss gun culture in their lyrics and although they are not breaking any laws there are acting irresponsible in the influence of their market. Rap artists will argue that it is not their responsibility; it is up to the individual or parent to distinguish music from reality. The ITC have laws and guidelines in place but it's not enough to stop children copying anything they see or hear which they think is cool. Gun Crime has increased by 35% in the last year1, which matches the increase in the popularity of rap artists and gun culture. Most are quick to blame the lyrics and actions of rap musicians such as So Solid Crew and Eminem. Last year three members of the controversial band, So Solid Crew where arrested on gun charges and Eminem is awaiting trial for pistol-whipping someone. ...read more.

Radio 1 DJ, Trevor Nelson made a comparison between Stephen King and serial killers, in that people who read his horror novels don't go out and kill people8. So Solid Crew supported this statement and added "films and computer games glorify guns far more than music and have a wider impact than music." Iyare, a member of So Solid Crew states he only carries a gun with him as a form of protection and not to glorify them. Others from the band claim they carry guns as a metaphor for life in general. Most members of the band say they feel threatened and therefore need to protect themselves. Most in the industry believe it is a social problem which they are not responsible for and can not do anything to change. With exception of Ms Dynamite, she believes "the media have blown it all out of proportion" but thinks she and others can help. She has agreed to join the police and front an anti gun campaign. She knows that she has a lot of teenage fans who idolize her and feel by making a stand she can make a difference. Eminem views himself as the voice of the young American underprivileged "trailer trash" community. He has made several statements telling his fans not to take his lyrics seriously. ...read more.

Although bands such as Eminem and Ms Dynamite can be seen as a good influence to children they need to remember that everything they do is watched intently by young and impressionable eyes. Parents also have a role to protect their children and become more involved in what there children watch and hear. The ITC can not ban controversial bands altogether because once they cross the line of censoring bands like Eminem, what is to stop them banning anything else they disapprove of in the future? And possibly breeching society's right to free speech. In the recent past there has always been a personality getting blamed for some kind of bad influence, it was only a few years ago rock musician, Marilyn Manson was blamed in America for influencing children to kill each other and themselves. Children need to be taught right from wrong so that they can distinguish what is sung about or shown on television or on a computer game is not reality and that it is up to them to be responsible for there own actions. Parents need to take responsibility for the way in which their children are taught and not blame the media and others for influencing their children. Media "is a powerful influence, especially on the feebleminded, and just as the Beatles all but sharpened Charles Manson's knife, So Solid Crew must accept"10 responsibility for their actions and the influence this inevitably has on society. ...read more.