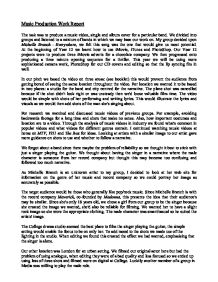 Music Production Work Report The task was to produce a music video, single and album cover for a particular band. We divided into groups and listened to a mixture of bands in which we may base our work on. My group decided upon Michelle Branch - Everywhere, we felt this song was the one that would give us most potential. At the beginning of Year 12 we learnt how to use iMovie, iTunes and PhotoShop. Our Year 12 projects were to produce three iMovie adverts for a chocolate company. We then progressed onto producing a three minute opening sequence for a thriller. This year we will be using more sophisticated camera work, PhotoShop for our CD covers and editing so that the lip syncing fits in well. In our pitch we based the video on three areas: (see booklet) this would prevent the audience from getting bored of seeing the same location throughout the video. For location we wanted it to be based in two places: a studio for the band and city centred for the narrative. The plane shot was cancelled because if the shot didn't look right or was unsteady then we'd loose valuable film time. The video would be simple with shots of her performing and writing lyrics. This would illustrate the lyrics and visuals as we would then add shots of the man she's singing about. For research we watched and discussed music videos of previous groups. For example, avoiding backwards footage for a long time and shots that make no sense. Also, how important costumes and location are to a video. Through the analysis of music videos in industry we found what's common in popular videos and what videos for different genres contain. I continued watching music videos at home on MTV, VH1 and The Box for ideas. Looking at artists with a similar image to our artist gave more guidance on shots to use and whether to follow a narrative. ...read more.

when she sings, "You always light my way" when we show a low angle medium close-up of her love interest against the sunlight in the background. Some of his shots turned out better than expected. Due to the sunny day, the sunlight on the camera created silhouettes and beams of light which produced a mysterious but warm effect on screen. The music and visuals are illustrated with fast music and fast editing when the drum beats in the song and there's a guitar solo. They are amplified when we speed up the buses in the street so it seems the world is going fast as the singer is writing the lyrics to her song. To contribute to the star status of our artist we included close-ups and other varied shots like long and medium shots so the audience will begin to recognise her, this was also developed by showing her in separate locations and in performance. We felt the use of voyeurism in our video wouldn't be suitable for Michelle Branch's music or image, yet we leant towards this idea on the male character as she looks or thinks about him obsessively. We tried to make Michelle Branch's video as original as possible, but still found some intertextuality within other music videos. The simple narrative of the male character and female singer has been present in most of Britney Spears' videos, for example Born To Make You Happy involved little narrative, just shots of her with her boyfriend in a plain room and singing, but the difference with ours is that she didn't interact with her love interest. Also, from the film Moulin Rouge Ewan McGregor and Nicole Kidman released the song Come What May that shows quick out takes of them both together fooling around in front of the camera to divide the music video up from the highlights of the film. We followed this idea with quick shots of our singer playing with the guitar. ...read more.

There was disagreement over them being quite plain, a few people thought something should be added to the covers whilst others thought it was better the way it was because it's simplistic yet illustrates the artist being a solo singer and there's a clear music genre. Everyone thought the tracks were clearly labelled on each cover and the black and white contrast on the back of the album was good as it was keeping to the simplistic theme, along with the images. Our audience thought the album looked more realistic including a thank you list and barcode however a few people spotted we forgot to black out the sign saying Madonna - Rain as this is the cover we used to scan in the Mavericks symbol. The spotlight above the artist on the front of the album added mystery and was similar to the single in that the artist is the focus of attention. For our sleeve showing the singer performing, someone commented it is good as it shows the artist can play the guitar and is having has fun. We were criticised slightly for not including more information on the inside cover of the album about each song, which I too think would have made the album more conventional. It was clear to our audience which images were for the album and single cover. The front covers portrayed a realistic image of the singer and the genre of music she performs, one of our important main aims for both the CD covers and video. Word Count: 2,994 Assessment Key Strengths Clear indication of brief and comparison with AS project. Records and reflects upon all stages of the production and accounts for main decisions made. Analyses finished product to show how form and content affect meaning. Appropriate reference to ideas from Goodwin about structure and representation in music video. Places production in relation to both other texts and industry practices. Good reference to audience feedback. Clear and systematic, detailed, thorough, reflective. Level 4 27/30 ...read more.