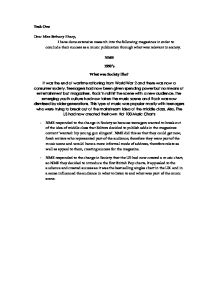 music publication through what was relevant in society.

Task One Dear Miss Bethany Sharp, I have done extensive research into the following magazines in order to conclude their success as a music publication through what was relevant in society. NME 1950's What was Society like? It was the end of wartime rationing from World War 2 and there was now a consumer society. Teenagers had now been given spending power but no means of entertainment but magazines. Rock 'n roll hit the scene with a new audience, the emerging youth culture had now taken the music scene and Rock was now dismissed by older generations. This type of music was popular mostly with teenagers who were trying to break out of the mainstream idea of the middle class. Also, The US had now created their own Hot 100 Music Charts - NME responded to the change in Society so because teenagers wanted to break out of the idea of middle class that Editors decided to publish adds in the magazines content 'wanted: hip young gun slingers'. NME did this so that they could get new, fresh writers who represented part of the audience; therefore they were part of the music scene and would have a more informal mode of address, therefore relate as well as appeal to them, creating success for the magazine. ...read more.