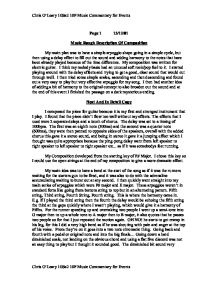 Page 1 13/12/01 Music Rough Description Of Composition My main plan was to have a simple arpeggio shape going in a simple cycle, but then using a delay effect to fill out the sound and adding harmony to the notes that have been already played because of the time difference. My composition was written for electric guitar. I think my melody basis had an unusual soft rock/pop feel to it. I started playing around with the delay effects and trying to get a good, clear sound that would cut through well. I then tried some simple scales, ascending and then descending and found out a very easy to play but very effective arpeggio for my song. I then had another idea of adding a bit of harmony to the original concept to also broaden out the sound and at the end of this event I finished the passage on a dark mysterious ending. ...read more.

I chose this key so I could use the open strings at the end of my composition to give a more dramatic effect. My main idea was to have a bend at the start of the song as if it was the runners waiting for the starters gun to be fired, and it was also to do with the adrenaline accumulating waiting to burst out at any second. I then quickly went straight into my main series of arpeggios which were F# major and E major. These arpeggios weren't in standard form like going from bottom string to top but in an alternating pattern. Fifth string, Third string, Fourth String, Fourth string. This is where the harmony came in. E.g. If I played the third string then the fourth the delay would be echoing the fifth string the third at the gaps quickly where I wasn't playing, which would give it a harmony of Fifths. ...read more.

for the Page 2 13/12/01 ending, the last part was a short quickly raked stab on the "Devils Chord" (as it is known) that finished it of a treat for when it said he falls on the floor. Throughout the whole song I tried to keep my time as perfect as possible, this was to do with the delay. Even the slightest sixteenth of a note wrong would mess up the whole thing. The only way I could keep proper time was to count in 8/4. Out of all the performance and compositions I don't think I would actually change anything I can safely say, except for I would work on the commentary from the start of the assignment instead of doing it the night before so I wouldn't forget half the stuff. CHRIS O'LEARY 10Sa2 10F ?? ?? ?? ?? Chris O'Leary 10Sa2 10F Music Commentary for Events Chris O'Leary 10Sa2 10F Music Commentary for Events ...read more.