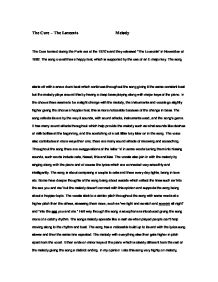 The Cure - The Lovecats Melody The Cure formed during the Punk era of the 1970's and they released "The Lovecats" in November of 1982. The song overall has a happy feel, which is supported by the use of an E major key. The song starts off with a snare drum beat which continues throughout the song giving it the same constant beat but the melody plays around this by having a deep bass playing along with major keys of the piano. In the chorus there seems to be a slight change with the melody, the instruments and vocals go slightly higher giving the chorus a happier feel, this is more noticeable because of the change in bass. The song reflects its era by the way it sounds, with sound effects, instruments used, and the song's genre. It has many sound effects throughout which help provide the melody such as what sounds like clashes of milk bottles at the beginning, and the scratching of a cat littler tray later on in the song. The voice also contributes in more ways than one; there are many sound effects of meowing and screeching. Throughout the song there are exaggerations of the letter 's' in some words turning them into hissing sounds, such words include cats, hissed, this and kiss. The vocals also join in with the melody by singing along with the piano and of course the lyrics which are connected very smoothly and intelligently. ...read more.

From there on the verses are alternative between which beats they fall on, this is the same with the choruses. Towards the end of the song there is a change musically and with the timing, where all of the lines fall on the first beat and the drum changes to a faster beat but is the same length. This song is a recital as it has been structured and rehearsed to perfection with no personal input when singing in time. Pink Martini - Una Notte A Napoli Instruments Pink Martini are a 12-member band from Portland. It is very difficult to place them in a genre as they cover many types of music. They have a number of instrumental influences such as Ravel, Chopin, Nino Rota and many others. They also get a lot of outside participation, like the song that is being analysed here, which is sung by an Italian star Alba Clemente. This song is especially rhythmic and sounds very romantic and rich. It is a haunting lover's ballad which is about a woman who meets a fallen angel, yet takes to the skies with this man with no wings. The song starts off with the piano in a major key which is soon to be accompanied by the vocal of a rich voiced Italian woman. A string instrument then escorts the piano and vocals, with a quiet warmer tone of plucking; a harp is then introduced and performs a solo for a few seconds. ...read more.

He also changed some of the lyrics from "crown of s**t" to "crown of thorns" removing the blasphemy and referring to Jesus instead. The song was firmly focused on the 70 year old man with no trick shots in the video, just simply moving towards the twilight of his career with issues and emotions which are not normally dealt with in videos. This cover obtained a Country Music Award for "single of the Year" in 2003. It has also featured on Television many times ranging from commercials to England's World Cup Football. This version has so much feeling and belief in the words and the video; it is so momentous it brings people to tears when just listening/watching it, including myself. In this version the song reflects on Johnny Cash's life with the video showing clips of his past, including such topics as the flood damaged House of Cash Museum being closed to public, footage of the country celebrity as a young man and also with his family, a family picture with the backing lyrics saying "everyone I know goes away in the end". This song has the same structure as the original with instead of an electronic blast it has a burst of a piano key being stuck continuously, which has so much more effect as in this case simple is better. In this particular case the original song has more technology and production, you could say Cash's version has more production although it was kept very simple, but the director was the famous Mark Romanek. ?? (footnote continued) SAMANTHA CAPLAN ...read more.