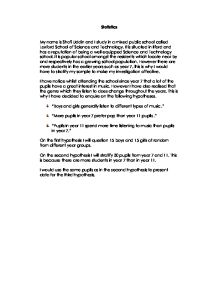 Statistics My name is Shofi Uddin and I study in a mixed public school called Loxford School of Science and Technology. It is situated in Ilford and has a reputation of being a well equipped Science and Technology school. It is popular school amongst the residents which locate near by and respectively has a growing school population. However there are more students in the earlier years such as year 7, this is why I would have to stratify my sample to make my investigation affective. I have notice whilst attending the school since year 7 that a lot of the pupils have a great interest in music. However I have also realised that the genre which they listen to does change throughout the years. This is why I have decided to enquire on the following hypotheses. * "Boys and girls generally listen to different types of music." * "More pupils in year 7 prefer pop than year 11 pupils." * "Pupils in year 11 spend more time listening to music than pupils in year 7." On the first hypothesis I will question 15 boys and 15 girls at random from different year groups. On the second hypothesis I will stratify 30 pupils from year 7 and 11. ...read more.

This also shows that the boys overall have a wider range of preferred music whilst the girls preferred mostly the same types of music. The Hypothesis has also proved to be true because as a whole girls and boys in my survey chose different types of music genres as their favourite. However I am aware that my sample was far too small to represent the whole population of girls and boys. It will be relevant to do a further hypothesis - this is because age can be a factor. For example students in different years may prefer different types of music. The young students may enjoy rap, pop, and other genres of music just to fit into a group, or to become more appealing to student of there age. Whereas an older student has the years to experiment with different forms of music and now has a favourite which they truly love - not just because they would feel welcomed with there peers. Second Hypothesis: "More pupils in year 7 prefer pop, than year 11 pupils." Minimising Bias In my pre-test I sampled 15 boys and 15 girls at random from the school. However, the school is growing and there are more students in year 7 than in year 11. ...read more.