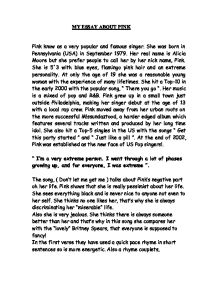 My Essay About Pink.

MY ESSAY ABOUT PINK Pink know as a very popular and famous singer. She was born in Pennsylvania (USA) in September 1979. Her real name is Alicia Moore but she prefer people to call her by her nick name, Pink. She is 5`3 with blue eyes, flamingo pink hair and an extreme personality. At only the age of 19 she was a reasonable young woman with the experience of many lifetimes. She hit a Top-10 in the early 2000 with the popular song, " There you go ". Her music is a mixed of pop and R&B. Pink grew up in a small town just outside Philadelphia, making her singer debut at the age of 13 with a local rap crew. Pink moved away from her urban roots on the more successful M!ssundaztood, a harder edged album which features several tracks written and produced by her long time idol. ...read more.

In the first verse they have used a quick pace rhyme in short sentences so is more energetic. Also a rhyme couplets, ( Teachers dated me, my parents hated me), is more catchy and memorable. There is also an internal rhyme, ( hated, dated ). The chorus " Don't let me get me " to " I wanna be somebody else " is several times repeated so it makes the main message sound more powerful. The texture gets thicker and thicker by adding more complicated drums rhythms. The beat doesn't change, four beats in a bar are constant. The instruments they used are: keyboard, electric guitar and drums. The words are very clear. I think that the artist have been influenced by the song because it represent people from her age and its about her self personal experience. ...read more.

The negative message could be that she always looks at her negative part of life and sees everything black. I think this is a very interesting and realistic song. I've really enjoyed because the composer writes what she thinks and not what people would like her to think. Also it uses lots of goods song techniques which make the song more interesting and "catchy" to the audience. Another fact that makes the song fascinating is that is written as an actual personal experience and also the words are very clear to understand. This ideas fit perfect with the drama work we did in class. In drama we used freeze images with choral speaking to represent some lines of the song, we acted some thoughts that the composer might had it when she was writing the song. I would take one of the messages of the song and try to represent them with an art picture or maybe even better with my own music performance!. By Antonio Ferrer Sarrias ...read more.